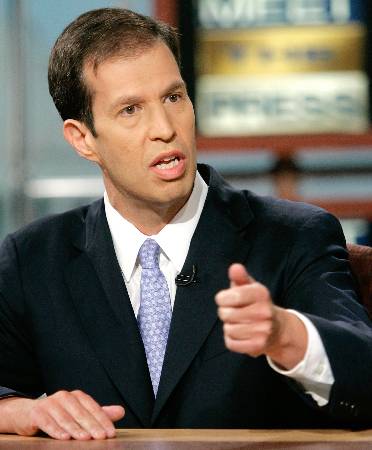 Former Republican National Committee chairman Ken Mehlman tells The Atlantic’s Marc Ambinder that he is gay and that he decided to come out in order to endorse efforts to legalize gay marriage.

Ambinder was apparently pushed to run the story two days early after Mike Rogers, whose track record on outing conservative politicians is very good, reported on Blogactive that Ambinder was preparing a story that would confirm that Mehlman was gay and the story was slated for Friday or early next week.

Within an hour of Rogers going public with his scoop that Mehlman was about to come out as gay, Ambinder posted his story.

It’s a rumor that has circulated around Washington, D.C., for years.  Mehlman–who was recently in the news for buying a condo in New York City’s very-gay Chelsea neighborhood–has previously denied he’s gay but now he tells Ambinder that he “arrived at this conclusion about his identity fairly recently” and “anticipated that questions would be asked about his participation in a late-September fundraiser for the American Foundation for Equal Rights (AFER), the group that supported the legal challenge to California’s ballot initiative against gay marriage, Proposition 8.”

Here’s what Rogers had to say about the news.

If I had to say what one thing really moved me to create this site it would be the 2004 reelection campaign of George W. Bush, the most homophobic national campaign in history. That campaign was run by one of the nation’s worst closeted individuals, Ken Mehlman.

If I first started writing about Mehlman in 2004, why is Ken getting his Roy Cohn Award now? Because I am able to report – here for the first time — that Ken Mehlman, the former Chairman of the Republican National Committee is set to come out of the closet in a column by Atlantic writer Marc Ambinder Friday morning or early next week. This will be on the heels of him being included in fundraising letter supporting marriage equality.

In 2006, Mehlman’s sexual orientation led to an uncomfortable moment for CNN after they edited a transcript and a video that featured Bill Maher outing Mehlman on Larry King Live. That story was later told in the documentary Outrage, which featured Rogers and his work to “out” closeted  gay conservatives who work against the LGBT community.

Ambinder seems like a natural to break the Mehlman story.  In 2006, he wrote about the challenges that Mark Foley scandal created for gay Republicans, including the lavender mafia that surrounded Foley and reached into the Republican establishment. A well-connected openly gay reporter, Ambinder would have the connections inside the web of gay Republicans to convince Mehlman to give him an exclusive.

According to the story, Mehlman and Ambinder have been talking for a number of years about Mehlman coming out and his views on gay issues.

A story about Mehlman, who was instrumental in GOP successes during his reign at the RNC, is definitely an interesting one although Mehlman is no longer a player inside the party. So does it matter if someone who is now largely out of power is outed as gay?

Rogers would argue that it does matter because it shows the alleged hypocrisy of closeted gays inside political movements that work against openly gay people.  It’s also a profoundly sad story, in many ways, given the lengths Mehlman has gone to in saying he isn’t gay.

Mehlman acknowledges that if he had publicly declared his sexuality sooner, he might have played a role in keeping the party from pushing an anti-gay agenda.

“It’s a legitimate question and one I understand,” Mehlman said. “I can’t change the fact that I wasn’t in this place personally when I was in politics, and I genuinely regret that. It was very hard, personally.” He asks of those who doubt his sincerity: “If they can’t offer support, at least offer understanding.

“”What I do regret, and think a lot about, is that one of the things I talked a lot about in politics was how I tried to expand the party into neighborhoods where the message wasn’t always heard. I didn’t do this in the gay community at all.”

Reaction to the news has been mixed. Salon’s Glenn Greenwald, who is openly gay, tweeted: “Having trouble deciding if reading that Ken Mehlman self-justification produces more disgust or pity – I guess those two sentiments overlap.” Joe Jervis at the influential JoeMyGod is having none of it, calling Mehlman a “quisling,” and using some salty language to show his disgust.

I know a lot of people will want to criticize him for heading up the GOP as a closeted gay man. He says he only recently came to terms with being gay. I suspect he always knew he was gay, but recently came to terms with accepting it, and embracing it. And good for him. He’s now doing the right thing, helping support marriage equality. I’m not going to fault him for that. Coming out is a horrendously difficult and complicated thing. It’s not rational.