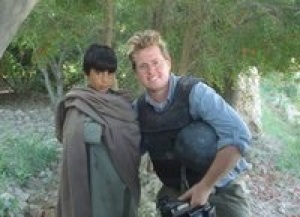 Earlier today we reported that a Muslim cabdriver was stabbed last night by a passenger in an apparent hate crime.  The suspect is Michael Enright, a 21-year-old film student at the School of Visual Arts, originally from Brewster, NY. Mediaite has obtained videos that he made about a veteran suffering Post-Traumatic Stress Disorder.

Foster Kamer at the Village Voice found Enright’s Facebook page, and noted Enright’s connection to Intersections International, a non-profit that promotes cross-cultural reconciliation and dialogue. This organization had recently issued a statement in support of Cordoba House, the “Ground Zero mosque.”  While Kamer believes this establishes a connection, the head of Intersections released a statement saying, “There is a person who fits the description of the alleged perpetrator who has worked with us as a volunteer, but until we get further confirmation of the details in this incident, we cannot comment.”

Meanwhile, Alex Pareene of Salon’s War Room blog has found two videos that Enright made. One is footage of a dialogue conducted by Intersection between a veteran and civilians, the other is a trailer for a documentary Enright was making about his friend entering the Marines and being deployed to Iraq.  This dovetails with the New York Post‘s report that Enright had “recently returned from Afghanistan.”

No one yet, however, has posted the videos that Enright made two years ago called John’s Story, about a Vietnam veteran with Post Traumatic Stress Disorder, based on Larry Winter‘s book The Making and Un-making of a Marine.

Enright’s Facebook page also lists him as a supporter of Assemblyman Greg Ball, the maverick conservative Republican who represents his home district and is running a heated primary campaign for the New York State Senate.  While Ball is an outspoken opponent of illegal immigration (here’s a video of him talking about illegal immigration as he walks through Enright’s home town), he has never made a statement about the Cordoba House. Ball was unavailable for comment at press time.