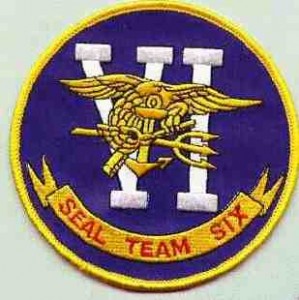 SEAL Team Six, the name given to the elite group that successfully raided Osama bin Laden‘s Abottabad compound, is, by design, shrouded in secrecy. So it’s quite – discreetly adjusts tin-foil helmet – well-timed that, now, when the team is enjoying (quietly, and away from the general public) the good cheer and accolades coming its way, a new memoir by a former SEAL Team Six member is hitting bookshelves. The book, due out this month, promises to offer some insight into the workings of this mysterious, highly-trained group.

Under the cover of darkness, Master Chief Knepper’s squad of seven SEALs arrived by boat. Not even the moon shone. His squad free-climbed a 350-foot cliff. After reaching the top, they lowered themselves into the VC camp. The seven-man squad split into two fire teams, taking off their boots and going barefoot to search for a VIP to snatch. Going barefoot didn’t leave behind telltale American boot prints in the dirt. It also made it easier to detect booby traps, and bare feet were easier to pull out of mud than boots. In the camp, though, the VC surprised the SEALs. A grenade landed at Lieutenant (j.g.) Bob Kerrey’s feet. It exploded, slamming him into the rocks and destroying the lower half of his leg. Lieutenant Kerrey managed to radio the other fire team. When the team arrived, they caught the VC in a deadly crossfire. Four VC tried to escape, but the SEALs mowed them down. Three VC stayed to fight, and the SEALs cut them down, too.

A hospital corpsman SEAL lost his eye. One of the SEALs put a tourniquet on Kerrey’s leg.

Just a typical day at the office when you’re in the shadows, doing things like quietly ridding the world of wanted, dangerous terrorists.