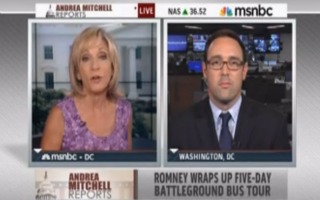 Former CBS writer/producer Greg Kandra, now a blogger and Catholic deacon, took to his website to criticize MSNBC’s Andrea Mitchell for her non-apology over the controversial editing of Mitt Romney‘s WaWa comments. Critics contend that the edit purposely made Romney look out-of-touch when he was really marveling at the distinction between private sector innovation and public sector stagnation.

The edits and the subsequent non-apology, Kandra wrote, have led him to no longer wish to defend his former colleagues from allegations of “liberal bias.”

In a post titled “Memo to NBC: What the hell is wrong with you?” Kandra wrote:

I’m tired. Truly. I’ve grown weary of trying to defend the indefensible and explain the inexplicable. For years, people have stomped their feet and pounded their fists and snorted “Liberal media bias!” and I’ve always tut-tutted and shooshed them and said, “No, no. Calm down. They meant well. It was just a misunderstanding. A mistake. These things happen.” I spent over 25 years working in the oft-reviled Mainstream Media and I saw up close and personal how the sausage was made. I knew the people who wielded the knives and wore the aprons, and could vouch (most of the time, anyway) for their good intentions.

Forget it. I’m done. You deserve what they’re saying about you. It’s earned. You have worked long and hard to merit the suspicion, acrimony, mistrust and revulsion that the media-buying public increasingly heaps upon you. You have successfully eroded any confidence, dispelled any trust, and driven your audience into the arms of the Internet and the blogosphere, where biases are affirmed and like-minded people can tell each other what they hold to be true, since nobody believes in objective reality any more. You have done a superlative job of diminishing what was once a great profession and undermining one of the vital underpinnings of democracy, a free press.

I just have one question:

What the hell is wrong with you guys?