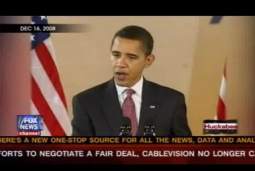 In this weekend’s NYT Magazine cover story President Obama revealed to Peter Baker that he has discovered “there’s no such thing as shovel-ready projects.” It was quickly pointed out by many that this assertion stood in stark contrast to the manner in which campaign Obama had pitched the stimulus package, namely that the money would be spent on shovel ready projects. To wit:

“I think we can get a lot of work done fast,” Mr. Obama, then the president-elect, said in December 2008, after meeting with governors. “All of them have projects that are shovel ready, that are going to require us to get the money out the door.”

A closer reading of the Peter Baker NYT piece reveals that Obama’s “shovel ready” remark came amidst of laundry list of things Obama thinks have gone wrong in his first two years, and that he would like to remedy going forward.

While proud of his record, Obama has already begun thinking about what went wrong — and what he needs to do to change course for the next two years. He has spent what one aide called “a lot of time talking about Obama 2.0” with his new interim chief of staff, Pete Rouse, and his deputy chief of staff, Jim Messina. During our hour together, Obama told me he had no regrets about the broad direction of his presidency. But he did identify what he called “tactical lessons.” He let himself look too much like “the same old tax-and-spend liberal Democrat.” He realized too late that “there’s no such thing as shovel-ready projects” when it comes to public works. Perhaps he should not have proposed tax breaks as part of his stimulus and instead “let the Republicans insist on the tax cuts” so it could be seen as a bipartisan compromise.

This of course has not stopped the cablers from turning the ‘shovel ready’ soundbite into an anecdote that reflects everything that is wrong with Obama’s presidency. Fox News in particular has been having great fun playing ‘shovel ready’ montages. So much fun, in fact, our video editor Jon Nicosia made a montage of all of their montages. Watch all the shoveling below.