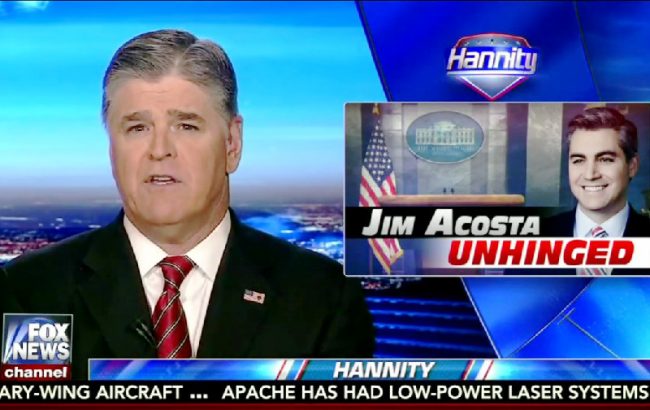 One of the hallmarks of Fox News’ primetime programming over the past few months has been the belief that the rest of the mainstream media is way too focused and obsessed with the Russia probe and its connection to President Donald Trump than with the REAL news. Tune in any night to Tucker Carlson and Sean Hannity and you’ll immediately be told that the Russia thing is a hoax and a conspiracy being driven by the liberal media who are, of course, in cahoots with Democrats and the Deep State.

So on a day filled with substantive news ripe for commentary — namely, the delay of the Senate health care bill — Tucker, Hannity and the folks at The Five decided the things they most wanted to focus on were…CNN and Russia?! (Record scratch.)

Let’s start with Tucker Carlson Tonight. The host has been very outspoken about his feelings on the Russia probe and the way the media has covered it. He’s lectured others time and time again for focusing too hard on it to the detriment of other issues. Yet, last night, when there was a very newsworthy event that demanded attention and analysis, Carlson felt his time was better served taking shots at a rival network while opining on journalistic ethics.

He opened with a monologue devoted to taking down CNN over its retraction of a Russia probe story. That was followed up with a segment featuring Mediaite alum Joe Concha where the two of them complained about CNN’s obsession with Russia. We then watched Brit Hume on for a bit for some more shots at CNN, this time over White House press briefings. We were given an interview with a Democratic strategist about Russian election interference and Obama not acting strong enough to stop it.

The second half of the program featured interviews with Charles Murray about college protests and a Muslim who supports the travel ban before we got a panel discussion on Stevie Wonder’s feelings about Black Lives Matter. (Yes, really. This occurred.) And to end the show, Tucker delivered a little commentary about Neil Gorsuch. But nothing on health care, despite it being arguably the day’s biggest story.

Over on the roundtable show The Five, at least the panelists somewhat touched on the issue of the day. They devoted an 8-minute segment to discussing it, spending much of that time ridiculing Democrats for their hyperbole on the issue. But that was it. The rest of the time on the program was devoted to the CNN story, Russia/Obama, how an increased minimum wage is killing jobs in Seattle and Bernie Sanders needing to lawyer up.

But, credit where credit is due. They at least broached the subject, even though they didn’t do it at the top of the show.

The coup de grace, however was Hannity. The conservative commentator just could not contain his glee over the CNN story and seemed determined to spend as much airtime as possible to it. Besides using his entire 9-minute opening monologue to assail the network and boss Jeff Zucker, he followed that up with a 6-minute conversation with Laura Ingraham where the two continued the assault on CNN.

After a panel segment where he and his guests tore apart Obama on Russian election interference and an interview segment with Circa reporters where they suggested Michael Flynn was being investigated by the FBI due to retaliation, Hannity used a 4-minute segment to personally attack CNN senior White House correspondent Jim Acosta. He ended his program with a segment where he blamed Obama for not stopping ISIS before asking his audience if they feel the former president should answer for his inaction in the face of Russian election meddling.

So, did Sean even mention the health care bill? No, he didn’t. (There was a very short news break in his program where it was mentioned, but that wasn’t delivered by Hannity.) But he sure as hell made time — at least 20 minutes of it — to rail against CNN.

To some degree I understand why Tucker and Sean didn’t want to focus on the Senate health care bill fiasco. It was bad news for Republicans and made the GOP look bad. There wasn’t much positive spin to come from the day’s events.

But, how do you expect anyone to take your commentary about other networks and outlets being obsessed with Russia seriously when you spend most of your time talking about Russia and how other networks are covering it?

Who are the obsessed ones, again…really?