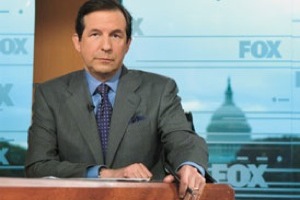 Chris Wallace has better things to talk about than whether a private institution chooses to put a Christmas tree in its lobby, much to the chagrin of radio host Mike Gallagher. The Fox News Sunday host visited his program on Friday in the hopes of discussing hard politics and, in being roped into discussing the “war on Christmas,” became irritated at Gallagher, debunking the claim that the holiday is under attack and becoming exasperated with the topic quickly.

Wallace already seemed peeved at being told to have a “merry Christmas” on the outset of the program, calling it “ridiculously premature,” being “stunned” that, on December 3, he would already be receiving the greeting. Upon Gallagher beginning to discuss a case of a Christmas tree being removed from a public place because someone was offended by its religious nature, Wallace began to grumble “oh gosh, stop this,” and “do we really have to talk about this?” He finally ceded, quipping “you’re the host so I’ll play along and pretend this is an important issue.”

He continued the challenge the claim that the “war on Christmas” was an issue at all as Gallagher asked him to comment on the Christmas tree removal, explicitly noting that “there’s not a war… maybe it’s a little tiny skirmish” and chiding Gallagher for covering a “radio talk show perennial… with the deficit commission, with unemployment, with millions of Americans out of work.” It is worth noting that the “war on Christmas” has not been a particularly popular topic on Fox News Sunday— although it even launched a line of bumper stickers over at the O’Reilly Factor, so Wallace’s opposition to the topic has precedent in his own journalistic work.

Gallagher mostly jokingly shrugged off Wallace’s complaints that there were more important things to worry about, attempting to downplay his disappointment with Gallagher for what he continued to argue was a waste of time. Gallagher’s response that he was happy to see a newly “feisty” Wallace didn’t assuage Wallace, however, who after much prodding went as far as to call the topic “about your speed,” as opposed to actual problems that are threatening the quality of life of Americans on a regular basis.

The fascinatingly frank comments by Wallace from Friday’s Mike Gallagher program below: