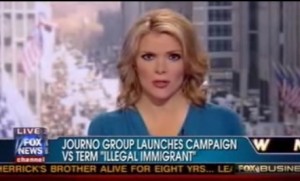 Fox News anchor Megyn Kelly is rasing eyebrows with her suggestion that a movement to replace the term “illegal immigrant” with “undocumented immigrant” is analogous to “re-brand(ing) the use of the word rapist to nonconsensual sex partner.”

Although her remark was clearly meant to evoke what some see as an Orwellian manipulation of language, the intense heat given to the mighty #Mooreandme protest over the dismissive treatment of rape allegations on MSNBC’s Countdown could spark a similar surge of outrage over Kelly’s remark. Here’s why I don’t think it should. (h/t Doug Mataconis)

Here’s the clip of Kelly’s remarks, from Fox News:

Kelly’s comparison is, without a doubt, self-contradictory. “Non-consensual sex partner” is a double-plus-oxymoron, in that without consent, you cannot have “sex,” nor can you be a “partner.” She would have been better served sticking to the burglary analogy, or perhaps drawing on the real-life marriage-dissolving National Organization for Marriage for inspiration. Even in misusing the comparison, though, she doesn’t trivialize rape. Indeed, the effectiveness of her analogy rests on the seriousness of the offense.

Intent matters, however, so while the remark could be seen as offensive, it’s clear to me that the intent (however misguided) was to illustrate the slippery slope that this sort of manipulation can lead to. In fact, it is here that Kelly’s guest, Jehmu Greene, falls short. She rests her argument on the notion that using the term “illegal alien” leads to violence against the undocumented, when the Society of Professional Journalists makes the more relevant point that the term “undocumented immigrant” is a less factually biased phrase. Creating a less charged environment should have remained a welcome, but secondary, side-effect.

In a similar vein, Fox News Managing Editor Bill Sammon landed in hot water when internal memos surfaced that showed exactly this sort of manipulation, but not because he was simply trying to dictate a more neutral standard, but because it appeared that his effort was driven by a desire to create bias where none existed.

Megyn Kelly and I probably disagree about a great many things, but I have always admired her toughness and skepticism, as well as her willingness to engage those with whom she disagrees. One instance in which we agreed completely, however, was the occasion of an online Playboy article that was an attack on women everywhere. Hopefully, her remarks on that issue will illuminate her intent in this case:

Update: Two things. First of all, my argument in Megyn Kelly’s defense is that she should be given the benefit of the doubt. I still hope that she apologizes, or clarifies her remarks.

Second, I wanted to point out this odd little kicker at the end of a writeup on this story by Huffington Post’s Katy Hall:

What does this have to do with rape culture, immigration, or political correctness? I do not know.