Frank Rich: Why Is Obama Always In The Wrong Place At The Wrong Time

Frank Rich: Why Is Obama Always In The Wrong Place At The Wrong Time 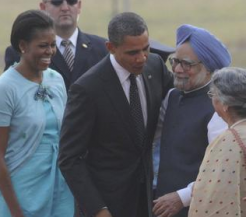 As another voice to the cacophony of pundits who have a problem with the Obama’s taking off for India. Frank Rich. Rich is not so much worried about the economics of the trip, or the President’s, er, “safety,” he just thinks it looks bad. Very bad. And it’s merely another misstep in a long line of them.

Optics matter. If Washington is tumbling into a political crisis as the recovery continues to lag, maybe the president shouldn’t get out of Dodge. If the White House couldn’t fill a 13,000-seat arena in blue Cleveland the weekend before the midterms, maybe it shouldn’t have sent the president there. If an administration charged with confronting a Great Recession knew that its nominee for secretary of the Treasury serially cut corners on his taxes, maybe it should have considered other options. Shoulda, woulda, coulda. Well, here we are.

What does Rich think is the solution to all this “shoulda, woulda, coulda”? He says Obama needs to call the (irresponsible) GOP’s bluff.

Obama has a huge opening here — should he take it. He could call the Republicans’ bluff by forcing them to fill in their own blanks. He could start by offering them what they want, the full Bush tax cuts, in exchange for a single caveat: G.O.P. leaders would be required to stand before a big Glenn Beck-style chalkboard — on C-Span, or, for that matter, Fox News — and list, with dollar amounts, exactly which budget cuts would pay for them. Once they hit the first trillion — or even $100 billion — step back and let the “adult conversation” begin!

And if he’s not willing to do this Rich thinks he “might as well just take his time and enjoy the sights of Mumbai.” Ouch.