From Glenn Beck To Nancy Pelosi: Experts Propose Time‘s Person Of The Year 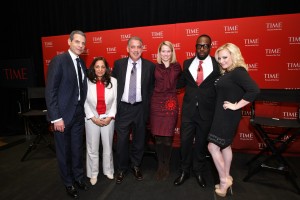 Every December, Time names a “Person of the Year”—the individual or entity that, in the magazine’s estimation, has had the greatest impact on the news either for good or for ill. The process for naming 2010’s recipient kicked off last night, when Time hosted a Person of the Year panel in Manhattan’s Time and Life building.

Each of the panelists has been a newsmaker this year in his or her own right: Meghan McCain, blogger and daughter of John; musician and Haitian activist Wyclef Jean; Google Vice President Marissa Mayer; veteran political strategist Joe Trippi, who helped Jerry Brown defeat Meg Whitman; and Daisy Khan, the co-founder of Park51—a.k.a. the “Ground Zero Mosque.”

The panel kicked off when Time managing editor Richard Stengel asked each member of the group who, in his or her opinion, should be named Person of the Year. McCain went first, with a suggestion many Mediaite readers would probably support: “The Tea Party is definitely my big nominee,” she said. “This movement surpasses politics. It is cultural, on a very basic level.” McCain also took a jab at Christine O’Donnell, saying that though her candidacy is symbolic of the Tea Party’s power, the Senate hopeful was “in no way qualified to do anything.” McCain suggested that Glenn Beck might be a good choice as well.

Trippi also recommended a Person from the political realm: Nancy Pelosi. He said that she represents the Democratic Party establishment that Tea Partiers were fighting against, and that she also presided over the most productive Congress ever. “What it produced, though, created all kinds of reaction everywhere,” he said, “including the biggest loss of the House in Democrats of any party I think since 1942.” He cited Pelosi’s influence as crucial toward pushing health care legislation through Congress and called her “one of the most successful Speakers ever—and at the same time, look what it all wrought.”

Wyclef began with a joke: “I got a little beef with the Time, man,” he told Stengel. “I thought I was going to make the cover.” He said that though his daughter would choose Lady Gaga, he’d suggest Time citing the Haitian people as POTY. “What happens is, the billion dollars per year that is supposed to come in for reconstruction—if you don’t put Haiti on the cover, after this year, Haiti will fade from the face of the map,” he warned.

Mayer said that 2010 has been a year of innovation and optimism, at least in the world of technology. “There’s now a second wave that’s happening,” she said. Technological innovation—and dependency—is a worldwide phenomenon, not just a national one; Mayer recalled reading a study which said that in Japan, people are rarely more than three feet away from their phones at any given time. She would therefore argue, in part, for making the smart phone POTY. And if she had to pick an actual person, she’d go with Steve Jobs: “I think it’s unbelievable that he hasn’t gotten it already,” she said, considering the incredible impact Apple has had.

Daisy Khan, who also serves as Executive Director of the American Society for Muslim Advancement, joked at first that she should be named POTY for making Americans aware of Islamophobia. Her real suggestion, though, was Mayor Michael Bloomberg, whose speech in support of Park51 was a turning point in that project’s struggle. “I think he was very influential… When he did it, many other politicians came forward. And even the President had to follow suit,” she explained. She also suggested Jon Stewart, for “try[ing] to restore sanity.”

During a Q&A period, the assembled journalists made their own suggestions to the panel. One said that Congress as a whole might deserve to be Person of the Year, while another proposed “The Unemployed American;” a third brought up Rupert Murdoch.

Finally, someone asked the panelists who they would nominate as the “bad guy” of the year. Wyclef recommended Haitian president René Préval, “because I don’t understand a long reign over 80 percent of a population that can’t read or write.” McCain went for Julian Assange, founder of WikiLeaks, “because I disagree with what he did. I think it’s un-American.” She added that he’s “scary” and “looks like a James Bond villain.”

Mayer said that if forced to choose, she’d pick a BP executive; Trippi agreed, citing Tony Hayward specifically. He also suggested Robert Mugabe of Zimbabwe. Khan said that while there are “so many” people she’d like to pick, she would say someone like Rush Limbaugh or Glenn Beck, since, in her opinion, they respect neither immigrants nor religious freedom. “I don’t know how they call themselves American,” she said.

Time‘s final pick will be revealed on the Today Show the morning of December 15. In the meantime, readers can vote for themselves at Time.com; currently, Julian Assange is winning the poll.