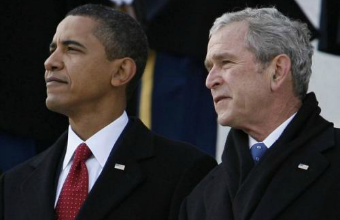 In a nationally-conducted telephone survey (random 1,004 adults), Gallup asked, “Thinking about the economic problems currently facing the United States, how much do you blame — [George W. Bush/Barack Obama] for these — a great deal, a moderate amount, not much, or not at all?”

Gallup first asked this question in July 2009, six months after Obama was inaugurated. At that time, 80% of Americans gave Bush a great deal or a moderate amount of blame, compared with 32% who gave the same level of blame to Obama. Naturally, over time the percentage blaming Bush dropped to about 70% in August 2010, and about half of Americans have blamed Obama since March 2010, with little change from then until now.

Interestingly, Gallup finds that “90% [of Democrats polled] blame Bush, in contrast to 19% who blame Obama. Republicans, however, are more ecumenical in their blame, with 83% blaming Obama a great deal or moderate amount and 49% ascribing the same level of blame to Bush. Republicans, in short, are significantly more willing to blame their most recent Republican president than are Democrats willing to blame Obama.”

Check out the poll info here.