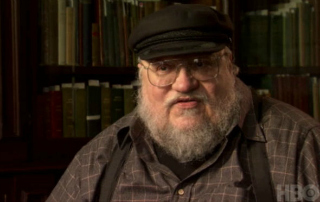 George R.R. Martin, author of the Game of Thrones novels that were adapted into HBO’s hit series took to the web this past weekend to air his grievances with the Republican Party.

In an angry post on his blog (LiveJournal? What is this, 2002?), the author ranted about what he believes to be “ongoing attempts at voter suppression in Ohio, Pennsylvania, Florida, Iowa, and other states where Republicans and their Teabagger allies control key seats of power.”

“It is one thing to attempt to win elections,” he continued. “But trying to do so by denying the most basic and important right of any American citizen to hundreds and thousands of people, on entirely spurious grounds… that goes beyond reprehensible. That is despicable.”

– RELATED: Russell Simmons: Romney, Ryan Will ‘Destroy Our People,’ ‘Laugh All The Way To The Bank’

Martin is a self-described Democrat who has used his blog to get political before: he once wrote that President Barack Obama is “the most intelligent president we’ve had since Jimmy Carter.” In the past, he has also ranted against the Transportation Security Administration’s screening policies, celebrated the passing of the Affordable Care Act, and suggested that Sen. Joe Lieberman — “Al Gore‘s biggest mistake” — be stripped of his citizenship.

Continuing on his anti-GOP rant, the sci-fi author concluded that “the people behind these efforts at disenfranchising large groups of voters (the young, the old, the black, the brown) are not Republicans, since clearly they have scant regard for our republic or its values. They are oligarchs and racists clad in the skins of dead elephants.”