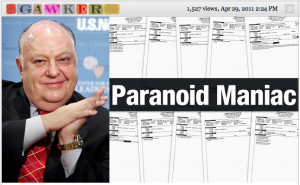 In a big article on the front page, Gawker has found information that they claim proves that Fox News chief Roger Ailes is a “paranoid maniac.” And all they had to do to get it was use the New York Freedom of Information Law to go through the police records in the small town where he lives, root around for all the times he’s mentioned, and then find out why police went to his house! Easy! In fact, it reminds me of Bob Woodward and Carl Bernstein’s seminal month-long investigation to prove that March had somehow transformed into April.

So, what is the proof that they found? From Gawker:

“Fox News chief Roger Ailes and his wife Elizabeth must get spooked a lot in their weekend home in rural Putnam Valley, N.Y., because they call 911 a lot. During one 30-day period last summer, police cars were dispatched to their address six times.

All told, according to police records we obtained from the Putnam County Sheriff’s Department via New York’s Freedom of Information Law, cops have been called to the Ailes’ home 10 times since 2009. In eight of those calls, units were actually sent to the house. None of the calls resulted in an investigation, arrest, or determination that any criminal activity had taken place.”

Look, I’m not saying that Ailes isn’t paranoid. There’s been plenty of information that’s come straight from the man’s mouth to show that he is, at the very least, idiosyncratic. And, the day Gawker stops breaking stories about the dirt underneath the finger nails of the rich and powerful is the day Gawker stops being Gawker, something that we certainly don’t want. That being said, isn’t there a very thin line between exposing someone’s paranoia and helping rationalize it?

More importantly though, is the information here really that exciting? So, the police are sent to check the security of Ailes house a lot. I guess that’s kind of interesting. It would be more interesting if the article didn’t also have to point out that many of the calls “seem to have been automated calls generated by their alarm system.”

So in summation, by all means, Gawker should do everything they can to check up on public figures. That’s just good journalism. However, if they don’t find anything significant, as the same writer John Cook did earlier this month about Ailes, perhaps they should turn down the hyberbolic headlines. Unless, of course, this is their plan; to make Roger Ailes so paranoid that he freaks out and does something huge and newsworthy.