George Will Would Like To Bizarrely Criticize Your Lack Of Manliness

George Will Would Like To Bizarrely Criticize Your Lack Of Manliness 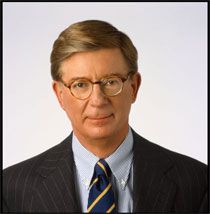 Criticizing the American public for the role its own immaturity plays in political gridlock is all the rage lately. Jacob Weisberg did it in Slate early last month, (rightly) pointing out it’s unrealistic to expect government to tackle the biggest issues facing the country while also getting smaller. And Evan Thomas does it in the latest Newsweek, similarly blaming a “culture of entitlement.” (Still, Weisberg and Thomas might allow that there’s a bit more those in Washignton could be doing to work together and get things done.) But the most…interesting “cultural immaturity” critique also comes from this week’s Newsweek, in the person of George Will. Will’s argument: that men are getting more and more immature and less and less, well, manly. Now, Will might even be right about this, but his methods in making his point leave something to be desired.

He gets off to a questionable start when he bemoans men “defecting from the meritocracy:”

One might look at that and think, “Wow – good job, women.” George Will did not think this. In fact, there seems to be a bit of “Oh-God-no-women-are-taking-over” undercurrent here, even if, as is likely, he didn’t mean for there to be. Also, “twenty-three percent” – is that really a cause for alarm of some kind? (Taking that a step further, is a subset of men earning less than their wives a cause for alarm either?) And re: his last point, he’s getting all worked up about something that 1) hasn’t even fully happened yet; 2) again, doesn’t sound like such a bad thing. The problems continue when he talks about marriage:

18 to 24? Isn’t that awfully young to start getting judgmental? A lot of those parents’-home-dwellers on the younger end of that spectrum are kids commuting to college, no? Remember, college? The thing he was just saying not enough guys are going to? And…18? Forget college, most people are still in high school at that age. And the wheels are about to fall off.

If you wonder what has become of manliness, [Penn State historian Gary Cross] says, note the differences between Cary Grant and Hugh Grant, the former, dapper and debonair, the latter, a perpetually befuddled boy.

Ah yes, Cary Grant and Hugh Grant. Very analogous. You can tell by the “Grant”s. Another instructive example: think of the differences between Theodore Roosevelt and this delicious roast beef sandwich. One was our 26th President, a Rough Rider, a passionate hunter – a true man’s man. The other? None of these! What is happening to manhood? OK, so Cary and Hugh are both handsome leading men, they’re both English-born – but wouldn’t, say, George Clooney be a better modern-day Cary Grant comparison as far as suaveness, dapper-ness, etc. is concerned? Or would that just defeat the purpose of the comparison?

Permissive parenting, Cross says, made children less submissive, and the decline of deference coincided with the rise of consumer and media cultures celebrating the indefinite retention of the tastes and habits of childhood. The opening of careers to talented women has coincided with the attenuation of male role models in popular culture: In 1959, there were 27 Westerns on prime-time television glamorizing male responsibility.

There is probably more “permissive parenting” than ever today, yes. How that directly segues into talking about how there aren’t any Westerns on TV anymore to tech men how to be real men is anyone’s guess. Just another bizarre paragraph in an increasingly confounding article.

>>>NEXT: Just about everyone is ruining George Will’s ideal vision of a man.