Gingrich Questions ‘Neocon’ Beliefs In Favor Of Rand Paul’s: ‘Hard To Argue Our Policies Have Been Effective’ 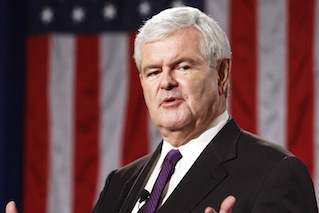 In the battle between the GOP’s libertarian and neoconservative wings, the libertarians may have just gained a defector.

“At some point, even if you are a neoconservative, you need to take a deep breath to ask if our strategies in the Middle East have succeeded,” Gingrich said. “It may be that our capacity to export democracy is a lot more limited than we thought.”

“I think it would be healthy to go back and war-game what alternative strategies would have been better, and I like Ted Cruz and Rand Paul because they are talking about this,” Gingrich said.

Gingrich insisted that this switch is the result of long consideration. “My worry about all this is not new, but my willingness to reach a conclusion is new,” he told the paper.

Indeed, the Times pointed out that Gingrich has questioned nation building in statements reaching far back as 2003. Gingrich also included George W Bush’s administration in the timeline of his critique of America’s foreign policy. “I think we really need a discussion on what is an effective policy against radical Islam, since it’s hard to argue that our policies of the last twelve years have effective,” he said.