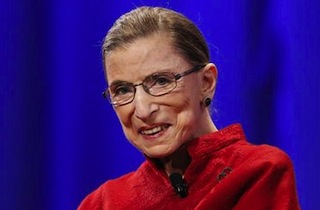 In a strong dissent on the so-called Hobby Lobby case Monday morning, Supreme Court Justice Ruth Bader Ginsburg sharply disagreed with the deciding justices in language so harsh Justice Anthony Kennedy felt the need to respond in his own concurring opinion.

“In a decision of startling breadth, the Court holds that commercial enterprises, including corporations, along with partnerships and sole proprietorships, can opt out of any law (saving only tax laws) they judge incompatible with their sincerely held religious beliefs,” Ginsburg wrote.

“In the Court’s view, RFRA demands accommodation of a for-profit corporation’s religious beliefs no matter the impact that accommodation may have on third parties who do not share the corporation owners’ religious faith—in these cases, thousands of women employed by Hobby Lobby and Conestoga or dependents of persons those corporations employ.”

RELATED: Everything You Need to Know About the Hobby Lobby Supreme Court Case

Ginsburg excoriated the majority justices for ignoring the intent of the the Religious Freedom Restoration Act and extending its protections, for the first time, to for-profit entities, which she saw as existentially distinct to the point of rendering their owners’ potential religious beliefs irrelevant to their practice of business.

“The distinction between a community made up of believers in the same religion and one embracing persons of diverse beliefs, clear as it is, constantly escapes the Court’s attention,” she wrote. “One can only wonder why the Court shuts this key difference from sight.”

Kennedy, whose opinion was largely concerned with limiting the scope of the decision, disagreed with Ginsburg’s assessment of the majority’s ruling. He argued “that the Court’s opinion does not have the breadth and sweep ascribed to it by the respectful and powerful dissent,” and maintained that the Court disagreed over the interpretation of the RFRA, but not its intent.