Glenn Beck Co-Host: Trump Is Lying About Us and He Knows It

Glenn Beck Co-Host: Trump Is Lying About Us and He Knows It 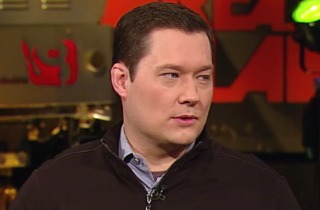 Donald Trump has been claiming for a while that Glenn Beck only hates him because he refused to do his show. He’s repeatedly mocked Beck and repeated the same assertion about the origin of Beck’s Trump hate again last night.

He explains that they’ve all been pretty critical of Trump for years––back in 2014 Beck ranted against Trump and said he should “just stay away from politics”––and at some point last year, Beck “eventually started thinking we should at least give him a chance to answer the charges.”

So they reached out to Trump for an interview to give him a chance to address a lot of the problems they have with him. Burguiere said, “Trump is saying we’re mad at him because he wouldn’t come on with us. In reality, the only reason we ever considered inviting him on was to answer our criticism of him that had been airing almost non-stop since the second he announced.”

They reached out to Trump a couple times, and this is how that played out:

We followed up with another request in September, in which we were told that Trump wouldn’t consider doing the interview unless Glenn called personally. He wasn’t going to deal with our peon bookers…apparently.

Over my screaming protest, Glenn initially said he would call Donald if it made him feel better. He was running for President and he wanted to give him a chance to answer our charges.

That’s not something I’ve ever seen him do. To my eye, Donald wanted him to kiss the ring. In the end, Glenn decided against making the call, and that was the end of it.

Burguiere concluded by saying Trump “knows he’s lying” before a huge list of all the times in the past Trump got harsh criticism on Beck’s show.

I realize this is only one of a few thousand lies, and in the grand scheme of things, it's one of little relevance. …