Glenn Beck Is Planning A Music Project To Compete With The ‘Horrifying,’ Liberal Trojan Horse That Is Glee 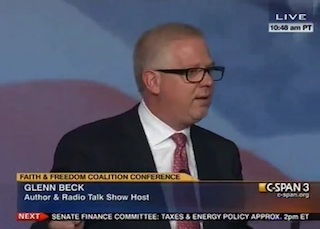 A little more than a year ago, we wrote about a long rant Glenn Beck had made on his Fox News show in a post called “Glenn Beck Stays Up At Night Worrying That Our Nation Is Hopeless Against The ‘Horror Show’ That Is Glee.” In the video, Beck told about how he had watched the teen soap with his wife and decided that family values were doomed because there was no way they could compete against a show like that well produced and that toxic to their way of life. Apparently, that fateful night of TV watching didn’t just give me a chance to write my favorite headline in the history of this site; it also caused Beck to begin plotting. And, as he explained earlier today, that plot is soon to be unfurled. Be afraid, glee club!

Speaking at the Faith & Freedom Coalition conference today, Beck again told the story of his 2011 Glee viewing experience (jeez, I can’t remember what I watched on TV two days ago) and launched into praising the series how brilliant every aspect of Glee is. While I could spend the rest of this article (and about eight more) arguing with that statement, Beck had more to say. You see, he’s no longer hopeless in the face of Mr. Schue and his wacky, gay marriage-loving singers. Beck has a new music project that he’s going to unleash that will sneak as many subversive messages to young people as Glee does, but will be sneaking in messages of Love™.

Beck joked that he was calling the project “the Oedipus Project” because the music will be so good that “the left will be making out with [him]” before they can even realize that it’s that crazy chalkboard guy who’s selling it to them. Why anyone would want to announce a new media project by referencing a story that ends with a guy stabbing his own eyes out is beyond me, but it’s something Beck’s sticking with. He made the same joke in a fascinating interview he did with BuzzFeed a few days ago where he announced the new direction he wanted to be going in. He’s not going to be that crazy chalkboard guy anymore. He’s going to be a friendly, conservative “Dick Clark.”

Clearly it’s a good thing Beck got away from Fox News. Not only does his autonomy enable him to embark on these incredibly ambitious plans, but have you watched Fox News lately? Those guys love True Blood! That show is like Glee on liberal crack!

Watch video of Beck’s Glee comments from C-SPAN below: