Glenn Beck Is The Next To Slam SOPA: ‘They Will Shut Down Voices Like Ours!’ 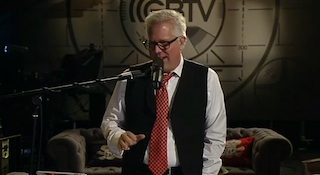 For the past few weeks, we’ve been hearing about how dangerous the heads of various Internet giants feel SOPA and PIPA are. However, now it’s time to hear from a newer Internet entrepreneur; Glenn Beck. However, while Beck may be greener to the Internet game, he’s being no less forceful in his condemnation of the laws.

Beck argued that we can’t give the government any more power, especially over the Internet which he described as “the only thing left that works.” He continued, asking his listeners to get involved.

Later he talked about the importance of free communication and the dissemination of ideas.

It shouldn’t be surprising what Beck’s feelings are. Not only is he in charge of a few Internet start ups, the idea of unfettered government control of the media seems about as anathema to the Beck brand as can be. And, while Beck began his discussion by noting that “it doesn’t seem like anyone’s for this thing,” he’s one of the first big anchors to really attack it, following only people like the likes of Keith Olbermann.

Hmmm. The only news people who have been able to come out against SOPA are people like Beck and Olbermann. I wonder why that is…