Glenn Beck: ‘Mitt Romney Could Be The Only Guy That Could Win’ In 2012 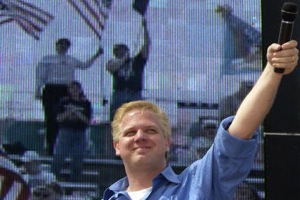 Glenn Beck and radio pals Pat Gray and Stu Burguiere rattled down the list of potential Republican nominees for President in 2012 this morning, and they had some bad news for the Tea Party movement: Sarah Palin probably won’t run, Ron Paul is still and long shot, and Mitt Romney, as of now, is the GOP’s best bet.

While Gray and Burguiere are harsh to most of the candidates, Beck spreads the love around. He tells his co-hosts that he likes Palin but doesn’t think she will run, Bobby Jindal but doesn’t think he has the charisma, and Congressman Paul but doesn’t think America is ready for him. Then, at the bottom of the pile, he finds Mitt Romney:

I have to tell you that Mitt Romney could be the only guy that could win, and I don’t know if he could because I think that Americans are going to be I mean, this country is going to be in deep trouble by 2012, and the next term, if it’s not decided this term, the next term will decide our fate. Then I hope that Americans are ready for an adult and are ready for hard news.

It’s a strange, possibly sad conclusion from someone who had called Romney out for “flirting with socialism,” but ultimately Beck was trying to determine who could win, not who he thought should. If Beck was playing process of elimination, which he clearly was, it’s hard to refute his conclusion that Romney is the least likely candidate to crash and burn in a general election, if only for being a conservative from the most liberal state of America and having moderate successes like universal health care under his belt. Or– and this one is for you conspiracy theorists out there– maybe Beck is intentionally downplaying the Republican candidates’ ability to success so as to clear the brush and become the reluctant right-wing candidate by default. After all, he is the second-most popular human being in America.