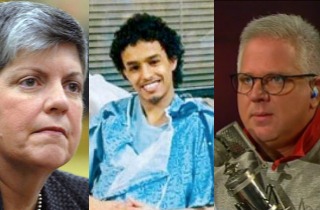 The Blaze radio host Glenn Beck revealed more details of the alleged security threat posed by a Saudi Arabian national detained by authorities in the immediate wake of the attack on the Boston Marathon last week. Beck revealed that the Saudi had an event file, was deemed by authorities to be “armed and dangerous,” and may have been flagged on the “no fly” list. Beck challenged members of President Barack Obama‘s administration to reveal to the public what they know about the Saudi and stave off an brewing inter-agency feud over which department is incorrect about the Saudi’s relevance to the investigation into the Boston attack.

An extensive post on The Blaze contains the details of what the government knew about Abdul Rahman Ali Alharbi, the Saudi Arabian national who was detained as a “person of interest” after the attack on the Boston Marathon last Monday.

Alharbi was reportedly set to be deported under “security and related grounds” after being suspected of having engaged in “terrorist activities” before that deportation order was revoked. Beck had previously stressed that Alharbi’s “212, 3B” status indicating a high threat level is difficult to apply to an individual and cannot be applied without showing extensive reasoning.

“The Blaze received word that the government may not deport the Saudi national,” writes Erica Ritz. “New info provided to The Blaze reveals Alharbi’s file was altered on the evening of April 17 to disassociate him from the initial charges.”

The Blaze also reported that the Department of Homeland Security has confirmed that Alharbi was placed on the terror “watch list” after the attack on the Boston Marathon.

Beck said on his radio program that an “event file” created for Alharbi listed him as an “armed and dangerous” person. A portion of the event file The Blaze released to the public shows Alharbi matched a “no fly” code and had not undergone a sufficient vetting prior to his admission into the United States.

“Since [Tuesday], according to the various agencies investigating the bombing, Alharbi has gone from person of interest, to material witness, to witness, to victim,” Beck said. He noted that the DHS accused the FBI of rushing to judgment in their decision to detain Alharbi in the wake of the attack on Boston.

Beck said that an official with U.S. Immigration and Customs Enforcement (ICE) informed The Blaze that they have mistaken this Alharbi with another Alharbi. However, Beck said, the DHS told The Blaze that they did not mistake anyone’s identity and the FBI had simply misjudged the threat posed by Alharbi.

“I’m wondering if we’ve ever learned anything at all from 9/11.” Beck asked. “Who takes the blame for this one in the end? I’m sure it’s not the White House.” He said a brewing inter-agency feud over the Alharbi detention issue will soon become an issue of major importance for the Obama administration as agency officials seek to shield their departments from blame.