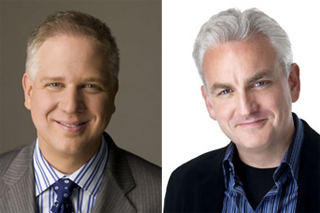 A few weeks ago, we wrote that the biggest test for Glenn Beck’s new GBTV network would be to see how its non-Beck shows faired and, at the moment, the most promising venture would be giving resident funny man Brian Sack his own show. Well, it looks like they were thinking the same thing. Sources at GBTV have told Mediaite that, during tonight’s show, Beck will be announcing The B.S. of A. with Brian Sack.

The show will be an extension of what has, so far, been a 10 minute segment at the end of Beck’s show, a format we didn’t think necessarily worked. It seemed to create a difficult tonal switch to go straight from Beck’s frequently dire prognostications to Sack’s humor. Having Sack get a separate entity seems much more likely to let he and his brand (and through that, GBTV’s) flourish.

The creation of any new comedy show of this kind is always interesting, especially when it is amongst the fairly sparse field of “right of center comedy.” It will be fascinating to see if the show breaks out and is able to overcome the inevitable hurdle of being viewed as “Glenn Beck’s Daily Show killer.”

“The B.S. of A. with Brian Sack is a half-hour political comedy show premiering
in October on GBTV. Sack’s mandate: Stay objective, rational and witty as he
views politics and pop culture through a nonpartisan lens.

Host Brian Sack is author of ‘The B.S. of A. – A Primer in Politics for the
Incredibly Disenchanted’ and previously served as Czar-at-Large for Beck’s
Insider Extreme network. His staff’s credits include Saturday Night Live, The
Late Show with David Letterman, HBO, MTV and several other three-letter
networks.

‘The B.S. of A. is a half-hour comedy news program. Our goal is to tackle the
B.S. inherent in American politics and pop culture. It won’t be for the
thin-skinned – we’re going to be completely indifferent to political parties or
ideology. In fact, I’m making the staff take the “no sacred cows” pledge, and as
soon as we figure out how to translate that phrase into Latin we will make that
the show’s motto. Because Latin makes you sound smarter than you are. I’d like
to put that on flags and cups. I have to think about merchandising.

Glenn keeps saying he wants to put Jon Stewart “out of business.” First of all,
I think we should manage expectations. If he really wants to do that I’m going
to need about 73 more people. Secondly, I don’t really want to do that. I
believe the world is a better place when you have a wide variety of comedy
shows. All I want to do is put on a comedy show that people who enjoy laughing
at this country’s nonsense will enjoy. There’s no reason to put anyone out of
business, though I’ve heard several strong arguments against George Lopez.'”