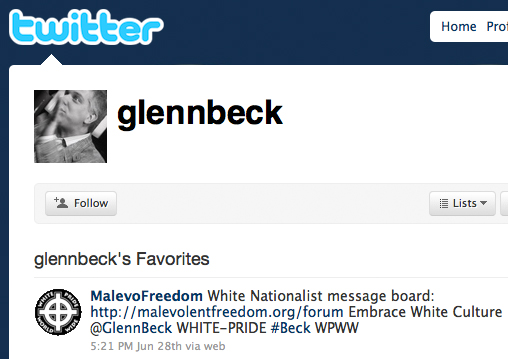 Media watchdog Media Matters picked up an item from Glenn Beck watchdog StopBeck.com that notes a troubling entry, that has since been deleted, on Beck’s Twitter favorites list: a tweet from a white power message board. In and of itself, this doesn’t mean anything. People “favorite” things by accident all the time, or just as a way to bookmark something they want to go back and read. What’s interesting here is the Beck-ian way these two sites try to exploit this.

The main reason I wanted to write about this was to point out that the appearance of this tweet on Beck’s favorites list does not denote an endorsement of it. To imply otherwise would be unfair. As I said before, Beck (or whoever runs his feed) may have clicked that little star by accident, or may have wanted to check out the link, at a later time, for an innocent purpose. Maybe he wanted to find out why a white power group thought he would be interested in them. Whatever you think of Beck (and I’m not a fan), I genuinely believe  he would be disturbed to think that a group like this drew inspiration from him.

This presupposes Beck has something to explain, but without making an actual accusation. It’s almost as though Frisch just put Beck and Malevolent Freedom on a chalkboard next to each other, then stepped aside to let you look at them.

Stop Beck then picks up the chalk:

Last year, Glenn Beck called President Obama a “racist” and accused the president of harboring a “deep-seated hatred for white people, or the white culture.”

He then says the same thing about Malevolent Freedom, and draws some swoopy, dramatic, back-and-forth arrows:

In case you missed the subtle parallels, he hangs a lantern on it:

For a guy that connects anyone he doesn’t like to all kinds of nefarious imagined plots using the flimsiest connections, Glenn Beck favoriting a tweet from a self-described white supremacist group raises questions:

He then goes on to note that Beck has since deleted all of his favorites. Then, in the final update, he posts a screenshot of Beck’s Twitter favorites as cached on July 8. I take points away because he didn’t say “How could Beck let that hateful tweet sit in his favorites for over twenty days?!?”

While many of Glenn Beck’s detractors will try to have some fun with this, I think fairness dictates that the only conclusion to draw here is that sometimes, you can even out-Beck Beck.