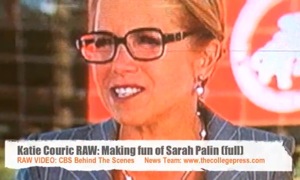 A slew of right-of-center websites are promoting a new video of leaked raw footage that alleges “proof” that CBS’ Evening News anchor Katie Couric was mocking then Alaska Governor Sarah Palin on the day she was announced as John McCain‘s running mate.

But what evidence is there that she was making fun of Palin? Not much actually.

Before launching into the break-down of what may or may not be the “smoking gun” in the following video, it’s important to place it in the proper historical context. Roughly two years ago, GOP Presidential candidate John McCain truly shocked the news world with the surprise announcement of Palin as his running mate. It’s almost hard to imagine that, back then, very little was known about Ms. Palin and her very unique backstory.

The unearthed video appears to be people watching and commenting on raw and unedited footage of Couric rehearsing news copy as well as recording interstitial promotional spots and recording voice over tracks. And the proof that she’s “mocking” Palin? Well let’s let the editors at Conservatives4Palin.com explain:

As you can see, the video shows Katie Couric preparing to go on the air on the day John McCain announced Governor Palin as his running mate. It shows some tantalizing hints of Couric’s attitude toward the Governor–when talking about first Trig, then Track, Couric says “where the hell do they get these [names]?…” At that point the producer running the sound board shut off the sound because he or she didn’t want to have Couric’s disdainful and contemptuous view of Governor Palin’s children captured on even an internal CBS tape that they never expected would see the light of day. You can tell this by the “OMG!” reaction of the CBS news employees who were in the control room as Couric said that about the Governor’s kids. This video also shows Couric taking a shot at female basketball players and at Governor Palin’s hometown, one of the fastest growing areas in the country, and the fifth largest city in Alaska.

So the “smoking gun” is Couric’s comment after reading off the names of Todd and Sarah Palin children, asking “where the hell do they get these (names)?” Clearly for some that is evidence of bias and mockery from Couric. But considering that, at the time that this was recorded, Couric almost certainly knew very little about the former Governor. And regardless of where one finds his or herself on the political spectrum, Palin’s kids DO have unique names. So, presuming that this is the first time that one is reading the names of the Palin’s children, “what the hell” is not an unsurprising response.

The post in Conservatives4Palin continues to present this footage in a a broader and, ostensibly, more damning context:

It’s not just what was said by Couric in her discussion of Governor Palin, but also the way CBS framed the narrative of Governor Palin’s life in their story. The script covers moose burgers, her kids, her being a former beauty queen and being on the cover of Vogue. Sarah Palin was a sitting governor, and at that time, before the Obama campaign and their allies in the press spent months relentlessly smearing her good name, she had the highest approval ratings of any governor in the country.

This line of thinking reveals a lack of understanding of relationships between news outlets and political campaigns. While the news copy was clearly crafted by the writers at Evening News, they were almost certainly given a set of details by the campaign. So to criticize the bullet points that Couric lists as evidence of her bias neglects the fact they were most likely provided by the McCain campaign. Further, if there was any frustration with the framing of Palin’s background and selection as VP candidate, surely Palin and her handlers would not have agreed to the now notorious and candid interview in which Palin did not list to Couric the titles of magazines that she regularly read.

Katie Couric is a well-regarded and very well-respected journalist, known just as well for her self-effacing style and sharp sense of humor. And the video clip seems to support her reputation as a “don’t take yourself too seriously” news anchor. Bottom line, to call this proof of her mocking Palin just falls way short of its mark.

Have a tip we should know? [email protected]om