Google, China and “Don’t Be Evil” 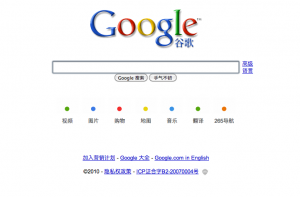 The famous Google mantra, “Don’t be evil,” reflects a optimism born, like the company itself, in the idealism and energy of innocence. While climbing to the top of Internet power-brokers, Google has relied upon a simple philosophy predicated on providing access to all information for every citizen of the world.

Today, an unusual admission: their optimism was misplaced. Like a community activist who finally gives up after encountering the most stubborn of cases, Google has announced that, barring some sort of miraculous turn-around on the part of the Chinese government, they’re shuttering the Chinese version of their site and, in fact, their offices in that country.

In a post on the company’s blog, David Drummond, Chief Legal Officer, outlines the tipping point in their decision-making process – a stealthy, sophisticated infiltration of their system targeting the most insidious of opponents to the Chinese regime: human rights activists. The core of the statement:

We have decided we are no longer willing to continue censoring our results on Google.cn, and so over the next few weeks we will be discussing with the Chinese government the basis on which we could operate an unfiltered search engine within the law, if at all. We recognize that this may well mean having to shut down Google.cn, and potentially our offices in China.

Drummond notes that the company’s initial decision to engage in China was met with disdain and skepticism. He links to their initial statement to Congress about this decision. In that statement, Google announced a new philosophy:

Google’s objective is to make the world’s information accessible to everyone, everywhere, all the time. It is a mission that expresses two fundamental commitments:

(a) First, our business commitment to satisfy the interests of users, and by doing so to build a leading company in a highly competitive industry; and

(b) Second, our policy conviction that expanding access to information to anyone who wants it will make our world a better, more informed, and freer place.

Some governments impose restrictions that make our mission difficult to achieve, and this is what we have encountered in China. In such a situation, we have to add to the balance a third fundamental commitment:

(c) Be responsive to local conditions.

In other words, while not being evil, they were willing to adjust points a) and b) in order to accomplish at least some component of those goals. They modified their underlying philosophy in order to give China a shot.

Today, they are conceding defeat, humbled by the sheer power of the nation’s desire to control how its citizenry uses the Internet. There’s certainly a lesson to be found in this decision about the oft-cited democratization effect of the Internet – it has its limits.

Twitterers, unsurprisingly, are praising Google’s decision, almost uniformly. From the start, as Google acknowledges, their decision to play there rankled free speech advocates who found appalling the censorship of what is generally seen as an data-providing utility.

But it’s hard to see this as a victory. Google sought, by partnering with the Chinese government, to avoid a Cold War of information. Their model was more perestroika than appeasement. In the end, they concede, their trust and optimism was defeated by the hard realities of state power.

Google wasn’t evil – nor are they now acting out of goodness. Their motto has always been misplaced; there’s no moral valuation that should apply to the spread of information. With this concession, like those nighttime maps of North Korea, there’s likely to be a dark spot in the free flow of information. Granted, yesterday, the nation of China was only dimly lit, and in places of the government’s choosing.

But it was lit.

Related:
Google Threatens To Pull Out Of China Over Cyber Attack [Mediaite]