Sounding Like A Candidate, Sarah Palin Makes Her Debut As Fox News Analyst 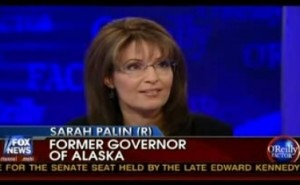 Sarah Palin made her Fox News debut “The O’Reilly Factor,” taking questions on today’s top political news and issues. Host Bill O’Reilly was friendly and supportive, but did push Palin on the rumors of her poor intellect presented in the context of her media coverage. Nancy Pelosi, Iran, Harry Reid and of course, Barack Obama were all discussed, and as expected, Palin eloquently hit all talking points consistent with the conservative agenda.

AP reports that “Palin’s multiyear deal with the network was announced Monday, and takes her back to her broadcast roots. She majored in journalism with an emphasis on broadcasting at the University of Idaho and worked part time as a weekend sportscaster in 1988 for an Anchorage TV station.”

In going over the latest news, Palin hit on a series of conservative talking points that both reinforced why she’s popular and why she’s considering a future run for higher office. Some highlights:

On Nancy Pelosi — O’Reilly asked if Palin thought she was a kook? Palin responded by saying that “she’s quite disconnected from what her constituents are telling her” and added that Palin doubts that her (Pelosi’s) San Francisco constituents are enamored with her leadership style. When pressed, Palin agreed that Pelosi “may even be to the left of Barack Obama.”

On Harry Reid’s comment regarding Obama’s “Negro dialect”– Palin said these “comments were indefensible, that his way of thinking is quite foreign to most Americans.” She also reminded viewers that she came “from a very diverse state,” and that “she’s married to an Alaskan native.” Palin doesn’t think that Ried is racist, but doesn’t think that Trent Lott is a racist either. Palin blamed “the left wing fo” playing this game with racism – letting Harry Reid’s comments slide, having crucified Trent Lott for essentially, along the same lines, saying the same thing.”

On Iran — Palin claimed that we are past the time of talking about sanctions, we need to follow through on this. On the Iran foreign policy to date, “there has been no change, except a change for the worst.” When asked about military attack, Palin said that it “needs to be our last option”, but she also made clear that what she wants most out of the White House. She “would like to see Obama Administration convince Americans that they would be will to do anything to protect Americans.”