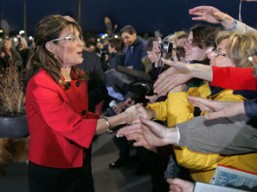 Howie Kurtz at WaPo notes an interesting trend among GOP candidates for this November’s midterms elections: instead of explaining themselves and backing up their arguments with facts, they are avoiding unfriendly press. Does this sound familiar at all? From Kurtz:

Some of the most conservative and combative Republicans running for Congress are convinced that the media have it in for them. But these candidates seem to regard it as an affront when reporters challenge them on their past statements and inconsistencies, which is a basic function of journalism. They are avoiding or limiting interviews with all but the friendliest faces as a way of circumventing the press. And some of them delight in skewering the mainstream media, a tactic that plays well with their base.

It’s not clear whether these folks — Kurtz singles out Rand Paul, Michele Bachmann, and Sharron Angle — are taking their media cues from Sarah Palin, who has famously retreated behind her Facebook, Twitter, and Fox News gig. But it’s difficult to imagine they’re not.

Alas, for them Palin is likely the exception that proves the rule: Nicolle Wallace calls her “almost like a Tom Cruise,” which might be a more accurate comparison than Wallace intended. Nevertheless, the point being it’s all well and good to hate the lamestream media but unless you happen to be the one person on the planet who’s able to refudiate the press and still be guaranteed national coverage than likely you are going to eventually have to answer some actual questions. And, fear not, so will Sarah Palin, if she ever officially decides to run for office again.