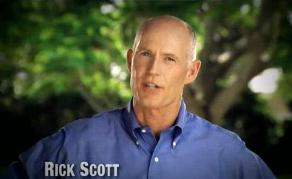 GOP candidate Rick Scott is running for Governor of Florida and he has a very solid shot of winning the nomination.

Now Scott has decided to weigh in on the local New York City issue regarding the Islamic Center near Ground Zero in a new campaign ad. Name of the ad? “Obama’s Mosque.”

“It’s about truth,” says Scott in the ad. “The truth – Muslim fanatics murdered thousands of innocent Americans on 9/11 just yards from the proposed mosque.” (“Just yards” is a new one.)

As Wonkette notes, this may be the beginning of candidates having absolutely nothing to do with the issue using the controversy for political gain. And certainly Rick Scott, the multimillionaire businessman, is using national issues in his Florida campaign. (I tried to make a joke about Andrew Cuomo commenting on one of Scott’s Florida stances but very few of his “issues” relate directly to his own state – also, the link to “educating Florida’s workforce” doesn’t work, Rick.)

But the more absurd issue here is the title of the ad: “Obama’s Mosque.” It doesn’t take six degrees of separation to see what’s happening here. It could have very easily said “Obama is wrong about the mosque” or “Ground Zero Mosque” – but it did not. Scott called it Obama’s Mosque, and made the very clear connection that this is somehow Pres. Obama’s mosque, and thus, Pres. Obama is a Muslim. Smarter politicians would have been less obvious about it.