GOP Rep. Implores Rubio, Cruz to Stop Fighting Each Other and Team Up to Stop Trump

GOP Rep. Implores Rubio, Cruz to Stop Fighting Each Other and Team Up to Stop Trump 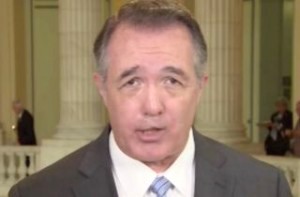 Republican Congressman Trent Franks is making a big plea today to both Ted Cruz and Marco Rubio to stop fighting and team up to take down Donald Trump.

Franks has been circulating a letter, obtained by The Huffington Post, in which he says one of them needs to drop out, be the other’s VP candidate, and then they take the fight to Trump, who Franks believes is way too volatile and inconsistent.

He writes that the choice for Republicans now is “whether to allow our anger with the status quo to cause us to jump from the frying pan into the fire and cast our lots with” someone who they’re not sure they can trust to fully uphold conservative values.

Franks is troubled by Trump’s positions on Planned Parenthood and the Israeli-Palestinian conflict, saying that “the stakes are too high” to make Donald Trump the actual president.

This is what he’s proposing for Rubio and Cruz:

For the sake of our country, the conservative cause, and future generations, we adjure you both to unite.

Unfortunately for many Republicans, that’s probably not gonna happen, as both Rubio and Cruz are saying in public they’re confident about having a path to victory.