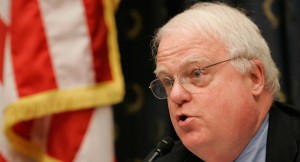 In a dustup first reported by fearless FishbowlDC firecracker Betsy Rothstein, Republican Congressman Jim Sensenbrenner (R-WI) was overheard insulting First Lady Michelle Obama‘s “posterior” in a loud cellphone exchange. His office declined to comment on Sensenbrenner’s own assets, but said he would be apologizing for the remark. Now, Politico reports that Sensenbrenner has sent a note of apology to the First Lady.

RELATED: GOP Rep. Sensenbrenner On Michelle Obama: ‘She Lectures Us On Eating Right While She Has A Large Posterior’

Rothstein was tipped off by a Democratic operative who overheard Sensenbrenner’s exchange, and in a characteristic touch, reached out to the Congressman’s office with questions that really cut to the heart (or something) of the matter:

My questions: 1.Does the Congressman realize that he, also, has a large behind? 2. Does he always speak so loudly on the cell phone?

While I love Rothstein’s moxy and diligience, I would only quibble with the phrase “also has a large behind,” as I’m sure most objective observers would agree that Mrs. Obama has nothing to be ashamed of in that, or any other, area.

A spokesperson for Sensenbrenner wouldn’t comment on his own baggage, but promised an apology would be forthcoming.

Earlier today, Sensenbrenner did just that. From Politico:

On Thursday, Sensenbrenner said in a statement, “I regret my inappropriate comment and I have sent a personal note to the first lady apologizing.”

He’s certainly not the first conservative to take cheap shots at the First Lady over her “Let’s Move” initiative ti fight childhood obesity, and much of it revolves around the ignorant notion that it involves “the government telling Americans what to eat.”

The thing is, the government has been promoting good nutrition and exercise my entire life (otherwise, I would have no reason to know what a “shuttle run” is), but nobody ever said it was a commie plot or a slide into tyranny until uppity Michelle Obama got in on it. The subtext isn’t really hidden at all: who does she think she is?

If anything, it’s the false central complaint about “Let’s Move” that Sensenbrenner ought to be apologizing for.

RELATED: The One Word That Describes FishbowlDC’s Betsy Rothstein

The real takeaway from this story, though, is the power of DC gossip Betsy Rothstein’s reputation. She printed an item from an anonymous source, about an ostensibly private phone call, and Sensenbrenner didn’t even try to deny it. The Congressman, and/or his staff, seemed to know that, much like The Wire‘s Omar Little, if Betsy Rothstein comes to get you, you’re gonna get got.