GOP Rep. Steve King Doubles Down On Comparing Immigrants To Dogs: ‘It Was A Compliment’ 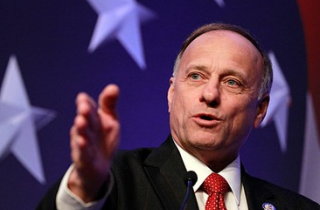 You’ve got to give him credit, Rep. Steve King sure has a knack for doubling down on his own controversial comments.

During an Iowa radio debate Thursday evening, Rep. King was given a chance to explain — and ended up defending — his controversial May remarks (which we covered here) in which he seemingly compared immigrants to dogs, telling constituents that U.S. immigration law should only allow the “best” immigrants into the country, similar to the way dog-buyers would choose the “pick of the litter.”

The comments generated a fair amount of controversy but, during the Thursday debate with Democratic challenger Christine Vilsack, King did not apologize nor claim poor choice in words.

Instead, he claimed the dog comparison was meant as a compliment:

This American vigor that we have that comes from legal immigrants who came to this country with a dream — we get the cream of the crop of every donor civilization on the planet — and people that can take a compliment and turn it into an insult are not going to be constructive working across the isle. But that’s what that was, was a compliment. And everyone who was there that heard that knows that.

To be fair, it could conceivably be a compliment to say the immigrants we do let in are “pick of the litter” or “cream of the crop.” Sure, yes, some people might enjoy that.

But it implicitly suggests that people who enter illegally or simply never get in are, in essence, lazy dogs. King neglects the fact that State Department data shows that a South African computer programmer must wait, on average, six years for a green card; an Indian computer programmer, 35 years; and for a Mexican with a high-school diploma it could take 131 years. Not everyone who we don’t “pick” isn’t a lazy runt of the litter.

Our restrictive immigration laws make it damn-near-impossible for hard-working people to get here. (Thus the need for innovative ideas like this.) And yet King wonders why people resort to digging tunnels under border fences, and automatically assumes stricter laws will alleviate the situation.

But even if we give King the benefit of the doubt, and take his off-color comparison as a “compliment,” he still needs to recognize just how poorly thought-out it was. Especially given that he’s the same congressman who proposed an electrified border fence in order to shock potential illegals “the way we do with livestock.”

Watch the original immigrants-as-dogs comparison below:

And hey, why not. For bonus measure, take a look at King on the House floor in 2006, building a plastic model of his desired Mexican border wall with electrified wire because “we do that with livestock all the time”: