GOP Resorts to Hitting Up Congressmen to Solve Cash Problems

GOP Resorts to Hitting Up Congressmen to Solve Cash Problems 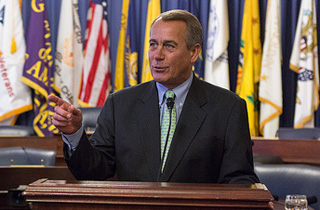 The Republican majority in the House might be threatened in this midterm election cycle — not because of popular support, but because the GOP doesn’t have the money to defend the seats. According to POLITICO, it’s reached the point where Speaker John Boehner (R-OH) is shaking down his colleagues to pay their party dues, literally.

The National Republican Congressional Committee, which helps fund crucial races, is financially supported through dues that party members pay each election cycle. Dues start at $32,500 and run into the hundreds of thousands, on a sliding scale based on seniority and prominence — which is why it’s a big deal that over 100 members have been tardy on paying up in this cycle.

As POLITICO explains, the conditions may be there for a GOP takeover of Congress, but the Democrats have a huge lead on fundraising. The Democratic counterpart of the NRCC has $113 million to their $91 million, thanks to a combination of their crowdfundraising machine and the power of an Obama fundraiser, and, unfortunately for the House, all the outside super PACs are funneling their money towards Senate races:

Oklahoma Rep. Tom Cole, a Boehner ally and former NRCC chairman, said the House speaker is concerned about dues to the point that “he thinks we are risking our majority for not giving our best effort.”

“I think he thinks the conditions are pretty ripe for us,” Cole said. “We think we have the opportunity to pick up seats. But if you go into an election with a major cash disparity, then we run the risk of losing the majority that really shouldn’t be in jeopardy. That’s what he’s said, and I agree with him 100 percent.”

[POLITICO]
[Image via Heather Reed/Office of the Speaker]