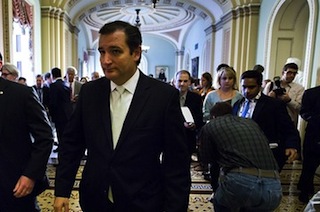 Republican Senators met with Senator Ted Cruz (R-TX) at a private lunch on Wednesday to demand he produce an strategy for getting the GOP out of the political impasse he’d engineered, and then fervently denounced him when he was unable to produce one.

“It was very evident to everyone in the room that Cruz doesn’t have a strategy—he never had a strategy, and could never answer a question about what the end-game was,” one senator told Politico. “I just wish the thirty-five House members that have bought the snake oil that was sold could witness what was witnessed today at lunch.”

Politico reported that the meeting got extremely tense when Cruz refused to repudiate attacks made against the senators by the Cruz-affiliated group Senate Conservatives Fund. Asked “point blank,” Cruz said, “I will not.”

Matt Hoskins, Executive Director of the SCF, scoffed at this. “If these senators had pledged to oppose funding for Obamacare, we wouldn’t have had to run ads against them. They only have themselves to blame.”

For his part, Cruz dismissed the senators’ criticism. “It seems that there is nothing the media likes to cover more than disagreements among Republicans, and apparently some senators are content to fuel those stories with anonymous quotes,” Cruz said. “Regardless, my focus—and, I would hope, the focus of the rest of the conference—is on stopping Harry Reid’s shutdown, ensuring that vital government priorities are funded, and preventing the enormous harms that Obamacare is inflicting on millions of Americans.”