Lindsey Graham: I’d Have to ‘Re-Evaluate’ Supporting Trump as Nominee After Slams on Dubya
video

Lindsey Graham: I’d Have to ‘Re-Evaluate’ Supporting Trump as Nominee After Slams on Dubya 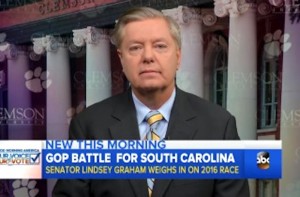 If you haven’t caught on by now, Lindsey Graham and Donald Trump have had a mutual dislike for each other since nearly the beginning of their presidential runs. During an interview today on Good Morning America, the South Carolina senator and former candidate said that Trump’s recent criticism of former president George W. Bush might give many the reason to stop supporting the  real estate mogul if he earns the GOP nomination.

“I’ve got to really re-evaluate that after what he said about George W. Bush,” Graham said. “There’s just the kooky people in the world; the mainstream Democratic party opposition to Bush did not go where Donald Trump went.”

Since leaving the race, Graham has been supporting Jeb Bush‘s campaign, and George Stephanopoulos asked Graham about the explosive food-fight Bush and Trump had in this weekend’s debate. One of the most heated moments occurred when Bush fought back against Trump for repeatedly slamming the Bush family name, which came to a peak when the mogul blamed the 9/11 attacks on former president George W. Bush.

The former President’s approval rating remains high in South Carolina, and though Graham previously promised to support the eventual GOP nominee, he said that it could be hard to do with Trump spewing ultra-liberal “Michael Moore“-type arguments.

“I have to sit down and think about what it means to have somebody running as the nominee of the Republican Party to accuse the past president of willfully lying about the facts and circumstances of Iraq, and being responsible for 9/11,” Graham said. “That’s something that really only comes from the kook part of America.”