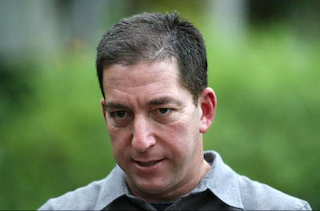 , is hitting “stands” this Tuesday, which helps explain why he’s even more ever-present than usual across the media landscape today. He stopped by the Today show Monday morning for a somewhat contentious chat with Matt Lauer and GQ released an extended interview with him online that will appear in the June issue of the magazine.

The Q&A session covers a large swath of topics, from his relationship with Edward Snowden (they still talk almost every day) to the possibility of a James Bond-like movie of his NSA leak story (“I was actually a little worried about that, because James Bond is stupid.”) But one of Greenwald’s most impassioned answers comes after a question about all the “early presidential jockeying” for 2016:

“Hillary is banal, corrupted, drained of vibrancy and passion. I mean, she’s been around forever, the Clinton circle. She’s a fucking hawk and like a neocon, practically. She’s surrounded by all these sleazy money types who are just corrupting everything everywhere. But she’s going to be the ﬁrst female president, and women in America are going to be completely invested in her candidacy. Opposition to her is going to be depicted as misogynistic, like opposition to Obama has been depicted as racist. It’s going to be this completely symbolic messaging that’s going to overshadow the fact that she’ll do nothing but continue everything in pursuit of her own power. They’ll probably have a gay person after Hillary who’s just going to do the same thing.

I hope this happens so badly, because I think it’ll be so instructive in that regard. It’ll prove the point. Americans love to mock the idea of monarchy, and yet we have our own de facto monarchy. I think what these leaks did is, they demonstrated that there really is this government that just is the kind of permanent government that doesn’t get affected by election choices and that isn’t in any way accountable to any sort of democratic transparency and just creates its own world off on its own.”

Greenwald did not tell the magazine if there is a presidential candidate he would be supporting instead, but it seems pretty safe to say he will not be voting for Clinton if she ends up getting the Democratic nomination.

Read the full interview at gq.com.