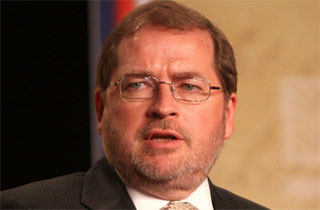 If you’re going to Burning Man this year, you may be surprised to find, among the naked wanderers in the desert, a guy who suspiciously looks like Grover Norquist. Rest assured, you have not taken too many drugs — that is most likely Norquist, who announced yesterday that he’s going to attend the annual festival celebrating radical self-reliance, decommodification, and bartering. (And also drugs.)

In an interview with National Journal, Norquist said that he’d always wanted to go to the giant naked festival, because, to him, the festival and its barter-based economy perfectly embodies his anti-statist views. ” Burning Man is a refutation of the argument that the state has a place in nature,” he declared.

While he won’t be doing drugs, he’s positive he’ll be fully immersed in the Burning Man experience, because the generally lawless environment has spontaneously produced a natural order based on the virtues of an “old-fashioned capitalism.” This, if you know the mission of Norquist’s group Americans for Tax Reform, is one of his favorite things:

“There’s no government that organizes this,” Norquist said. “That’s what happens when nobody tells you what to do. You just figure it out. So Burning Man is a refutation of the argument that the state has a place in nature.”

“This is a fun, exciting, cheerful collection of people being free of state control and doing stuff they want to do,” he continued. “If somebody wants to sit in a corner and read Hayek, I think that that’s allowed. If people want to run around with not as much clothes as they normally do, I think that’s allowed as well.”

Norquist’s interest in Burning Man isn’t new: he actually was invited to the festival in 2012 by its founder, Larry Harvey, but a scheduling conflict prevented him from going: “It wasn’t doable with schedules and so on because the Republicans put their convention right on top of Burning Man, silly people. That’s why they probably lost the election.”