Gyrocopter Pilot: I Emailed Obama to Tell Him I Was Coming

Gyrocopter Pilot: I Emailed Obama to Tell Him I Was Coming 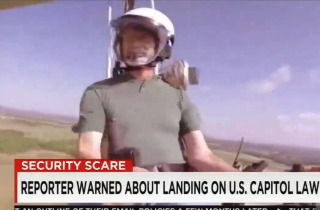 Before 61-year-old Florida mailman Doug Hughes landed a gyrocopter on the west lawn of the U.S. Capitol, he wrote on his website that he actually let President Barack Obama know of his plans, in order that Capitol Police would know that he is not a threat.

“My flight is not a secret,” Hughes wrote on his website, TheDemocracyClub.org. “Before I took off, I sent an Email [sic] to info@barackobama.com. The letter is intended to persuade the guardians of the Capitol that I am not a threat and that shooting me down will be a bigger headache than letting me deliver these letters to Congress.”

Info@barackobama.com, however, is an account run by his former campaign operation, which is now Organizing for Action. He did not send the notice to a WhiteHouse.gov account. He did, though, encourage supporters to call the White House to let the president know they “oppose shooting me down.”

–RELATED: Lindsey Graham: I Don’t Know Why Gyrocopter Wasn’t Shot Out of the Sky

Hughes, who wanted to hand-deliver a letter to Congress to protest the Citizens United court decision and demand campaign finance reform, was not shot out of the sky because, according to Homeland Security Secretary Jeh Johnson, Hughes “literally flew under the radar.”

A bystander caught the landing on camera as it approached the Capitol building. You can watch that below, via the Associated Press: