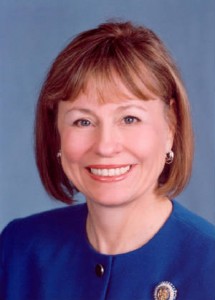 Nevada’s new Republican Senate Candidate Sharron Angle doesn’t seem to like old Tea Party affiliate Sharron Angle. But her opponent, Democratic Senate Majority Leader Harry Reid, is not about to let the new Sharron Angle forget the old Sharon Angle anytime soon. In fact, this past week has witnessed an amusing back and forth between the Reid and Angle campaigns over Reid’s latest campaign weapon, a copy of Angle’s old, pre-nomination website.

After Angle’s nomination, her website underwent a major redesign. The new website looks sleeker and more professional, and, more importantly, the new site has toned down her political rhetoric.  Reid’s campaign, however, saved the old version and put it online under the domain name therealsharronangle.com, stating “what was good enough for Nevada voters to read during the primary should be good enough for them now.”

Last Friday, Angle’s campaign sent the Reid campaign a cease-and-desist letter accusing them of copyright infringement and threatening legal action if Reid’s campaign didn’t remove the fake website. The Reid campaign took down the site while they reviewed Angle’s allegations, and instead rerouted the domain name to another website, Sharron Angle’s Underground Bunker, where visitors could view the same material in a different format.

Yesterday, however, the Reid campaign decided Angle had no basis for a lawsuit and put the website (with a few minor modifications) right back up. From the Reid campaign’s new press release:

The phony legal threats and the feigned indignation are over – and we’re not going to let Sharron Angle retroactively censor Sharron Angle. The original website, including Angle in her own words on her dangerous and extreme agenda, has been re-launched at: www.TheRealSharronAngle.com.

Just to be clear to Sharron Angle and her handlers, it’s called free speech and it’s nearly absolute under the First Amendment.

In other words, it seems, Mrs. Angle can make vague illusions to the Second Amendment all she likes. Reid will just quote the First Amendment right back at her.