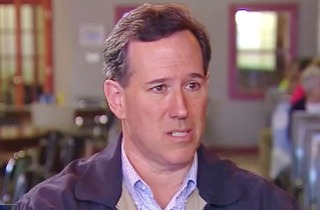 In a public speech last week, Putnam claimed an an unnamed “presidential candidate” (read: Santorum, who isn’t officially running yet, BTW) quoted his latest book, Our Kids, as concluding with that above misquotation as a conclusion. “He’s a conservative; he took what I was saying and sort of so misinterpreted it that it isn’t in the universe of what I said,” the professor said.

However, Politico recapped what actually happened in the Santorum speech to which Putnam referred:

Santorum originally brought up Putnam’s book in a speech at the Cornerstone group in New Hampshire on May 12, referring to the scholar as “a liberal icon” and claiming that his ideas echo conclusions by conservative scholar Charley Murray that Santorum has been discussing for more than a year.

“Putnam said … the principal reason that people don’t have the ability to rise anymore is what? The breakdown of the American family,” the Pennsylvania Republican said.

Santorum then went on to discuss a statistic he’d read in Putnam’s book about out-of-wedlock births.
“A majority of children being born out of wedlock today in America are born in families where the father is in the home, but they’re not married,” said Santorum. He contrasted the situation of children born in wedlock today with those from the 1950s, 80 percent of whom had parents that eventually married.

“Now [in 2015] these fathers leave the home and not just father children with that particular woman, they father a child with another woman, and another and another,” Santorum said. “We have created predators, sexual predators, particularly where? Again, Putnam — low-income America.”

After being called out on the misquotation by the Weekly Standard‘s Mark Hemingway, Putnam tweeted an unequivocal apology:

Last week I carelessly but seriously misquoted Senator Santorum. I apologize to him unreservedly. @RickSantorum @weeklystandard