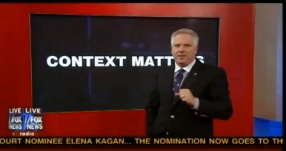 Anyone else starting to get the sense the White House has been set up by Andrew Breitbart and fallen for it hook line and sinker? Any doubts to the contrary were quickly eliminated 30 seconds into Glenn Beck‘s show tonight.

Yesterday Breitbart released a video that showed a portion of (now former) USDA official Shirley Sherrod‘s speech at a March 27 speech at an NAACP banquet, which Breitbart described as “video evidence of racism coming from a federal appointee and NAACP award recipient and in another clip from the same event a perfect rationalization for why the Tea Party needs to exist.”

The NAACP and the administration apparently agreed: Sherrod’s words were denounced by the former shortly after the video became public and the USDA accepted her resignation last night.

This morning Sherrod began making the rounds telling the media that the video had taken her words out of context, and in fact she was trying to tell a larger story of redemption. Sherrod has mustered some unlikely allies to this defense: Andrew Breitbart’s BigGovernment just posted a long piece calling on the NAACP and the White House to release the full video of the event “if the speech was indeed as she said, why wouldn’t they respond by releasing the entire speech?” Why indeed? Presumably Breitbart is in possession of the entire tape, how else could he release a mere clip and and state so assuredly that Sherrod was making a racist remark if he didn’t know the full context. Nevertheless the new storyline on the right is that Sherrod was some sort of sacrificial lamb. Money quote from the new BigGov post:

If this story is true, and there is no reason to doubt her, it shows the extent that Breitbart, Fox, and the Tea Party have gotten under the skin of the White House. Rather then to think it through they overreacted and forced Sherrod to pull over on the side of the road and resign without telling her side of the story.

Emphasis mine, since one suspects that may have been the larger goal here: to frame the White House as running scared from Breitbart, Fox, and the Tea Partiers (and truth be told, it sort of appears that way). This new meme conveniently popped up again tonight on Glenn Beck, who opened his show with a long diatribe on why “context matters.” [Watch below.] He went on: “Is it possible this is a political assassination from the White House?” No mention of course whether Breitbart, if in fact he did not have the full video has Beck states, should have waited before posting his accusatory post.

It’s entirely possible that Breitbart has been caught in a bad mistake and is attempting to backpedal with this new meme. Regardless, what is likely going to happen here is that the administration is going to come out looking like the bad guy. The new cable meme will very very shortly be this: The White House jumped the gun and fired a woman based on an Andrew Breitbart video clip without waiting to find out the context or to discover whether it had been edited. Considering how the ACORN story eventually unfolded it’s hard not to see this as a case of “fool me twice,” and it’s hard not to see, even if Andrew Breitbart is completely in the wrong here, how he does not come out the winner.

Update: The full video of Shirley Sherrod’s speech has been posted and I highly recommend you watch, it’s extraordinary. Sadly, what is now all the more stunning in light of the full context of her words is the administration’s response. As for Andrew Breitbart, it’s hard to know whose behavior is more disturbing here, his, or everyone else’s who blindly jumped on the bandwagon.