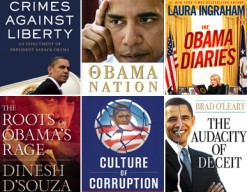 Back in 2008 the media world spent a lot of time talking about how much the media world loved Barack Obama. For a while there it seemed like Candidate Obama was the only cover subject in which anyone was interested and that along with all the other change the nation was encouraged to believe in, Obama might single-handedly save the print industry. Oh what a difference two years makes. Sort of.

The Daily Beast’s Jon Avalon reports that Obama is still good business for the print industry. Or at least hating Obama is.

Hating President Obama has become its own industry—and here’s a new stat to prove it: To date, there have been at least 46 anti-Obama books published. I’m not talking about thoughtful criticisms of his policies, but detailed demonizations of the president. These screeds cannot help but have an impact on the typically low-turnout, high-intensity midterm elections that will take place Tuesday.

It’s also evidence that the proliferation of Obama Derangement Syndrome has out-paced Bush Derangement Syndrome—big time. At this point in Bush’s presidency there were only five anti-W books (a total no doubt depressed by the national unity that emerged in the wake of 9/11). It took Bush until November of 2004—the culmination of his contentious re-election

It’s not secret that the discourse surrounding President Obama, and really our political process as a whole, has become stunningly polarized, but I would hazard a guess that this proliferation of anti-Obama books has similar roots to the proliferation of anti-Obama blogs and anti-Obama cable coverage, namely, it is good for business. Controversy (and one might argue, hyperbole) is the name of the successful media game these days and like anything else success breeds imitation. It remains to be seen whether the current affairs shelf at the bookstore is a fair reflection of the views of the voting public.