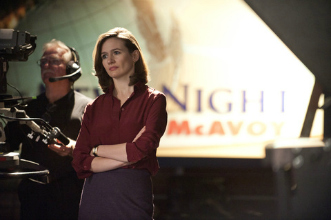 During the press blitz for this Sunday’s debut of HBO’s new original show The Newsroom, lead actress Emily Mortimer spoke to Salon about her views on America’s news culture, which is the main subject of the Aaron Sorkin-penned show. The British actress criticized Americans as being “improperly informed” as a result of “over-sensationalized” broadcast news.

“Are you as troubled by America’s news culture as Sorkin seems to be?” asked Salon.

Mortimer explained that when George W. Bush was re-elected in 2004, she felt that “so much of the problem about the way that politics go here is that people are improperly informed. That they didn’t know that they had been lied to, or they didn’t understand exactly to what extent they had been, and they still thought that there were weapons of mass destruction. And that was just crazy to me that people could be so under-informed.”

The veteran actress went on to explain that she believes news media culture is substantially better in her home country:

There’s so much wrong with England, but I think people are informed in general. I’m going to make a huge sweeping statement, but you just get the news much more [in England]. Listening to radio stations that play pop music all day and all night, the news will come on every two hours, foreign news too. It’s part of your daily routine, being informed about what’s going on in the world. Whether you like it or not, you can’t really escape it. I don’t think the same is true here, and television broadcast news especially seems to me to be a pretty dicey area. You can’t rely on getting the facts, or getting them presented in a way that is actually objective and makes sense and puts people in a position where they can make informed decisions about who to vote for.

She went on to describe the American media as “over-sensationalized and, as our show keeps pointing out, one of the big problems is that they act like there’s just two definite sides to every discussion — and that’s just not necessarily the case, but it feeds into the way this country has just become completely polarized.” Part of that, she said, is that the “tea party is presented on the television as the viable alternative instead of like a lunatic fringe.”

The Newsroom is expected to be Sorkin’s critique of America’s mixture of politics and entertainment. Mortimer praised the writer for trying to change that culture for the better, quoting a British political theorist:

Edmund Burke once said: “Evil happens when good men do nothing.” When people stop trying to change things and stop trying to make things better, then bad shit happens. And I think Aaron, for all his wonderful craziness, is a good person trying to do something, and that’s amazing.