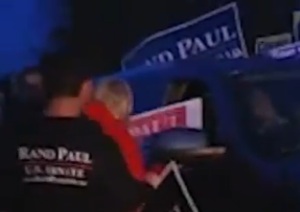 Regular readers of Mediaite are most likely familiar with the story Lauren Valle, the Rand Paul protester who, after accosting the politician, was wrestled to the ground and had her head stomped on by a Paul supporter. Since then she’s become something of a cause célèbre, appearing on Countdown with Keith Olbermann. But exclusive new video published by RedState refutes some of the specifics of the story Valle retold on MSNBC. Never thought I’d ever type this before, but…Headstomping-gate? Update below.

The post written by “RedState Insider” posits the notion that Valle’s story reinforces the left-of-center narrative that “conservatives are violent teabaggers” but opens with the obvious reminder “don’t stomp on anyone’s head.,” continuing “There are no mitigating circumstances to be presented in this article or video. You don’t stomp on a person’s head,” before getting into the specifics.

The question we are addressing here today is the story that Lauren Valle is telling, and which is being retold as “conservatives are violent crazy teabaggers” grist on liberal blogs and in the MSM. The official story is that Valle merely attempted to show Rand Paul a sign, and that his supporters simply attacked her for not being a supporter. Watch this interview from Countdown for the tale:

Well just before the tape I was identified by the Rand Paul campaign because they’ve seen me around town at these events. And they realized they know me because of my work and they don’t support it. So they actually formed a blockade around me once they realized that I was there. And as Rand’s car pulls up they step in front of me and start to block me so I stepped off the curb to try and get around them and at that point they pursued me around the car, chased me around the car, and what you see in the video is when I’m in the front of the car and that’s when I’m pulled down and then my head is stomped on.

This video was sent to RedState by an anonymous witness at the event. It shows what Valle was doing when the Paul supporters grabbed her. No one chased her around the car. She was never in front of the car. As you can see in the video, Valle reached in the candidate’s window with her “RepubliCorp” sign and shoved it in his face. Several supporters in Paul shirts have her surrounded at that point, and a man in a suit is the first person to actually intervene physically. It’s hard to tell from the video, but it could be that the man in the suit was with Paul’s security staff.

The issue here is not whether one should feel sympathy to the Rand Paul supporters that grabbed and stomped on her, but rather, Valle has a very specific agenda that is not consistent with Mr. Paul. But more importantly, the video below shows how the security were reasonably freaked out when a wig wearing protester rushed to Rand Paul’s car. In hindsight its clear that she didn’t deserve the treatment that she received, but in this super charged and partisan political climate, security detail are reasonably on heightened alert. Watch the video from RedState below and read their who post on the matter here.

Update: An astute reader points out that in the video below, Ms. Valle does appear to run around the car at :54 in the video below. This runs directly counter to the assertion made by Red State that her version of events do not support what the tape reveals, rather, they are actually quite consistent.