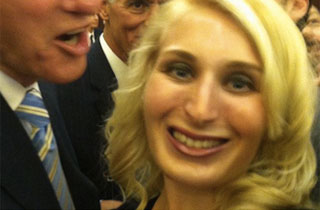 If you’re wondering how conservative roustabout James O’Keefe was able to get video of Eric Garner‘s daughter suggesting Al Sharpton is a money-grubbing publicity hound, Animal New York has a good answer: Send someone to overzealously pretend that she’s a Garner supporter (and a liberal) in order to ingratiate herself with protesters.

The Project Veritas employee who asked Erica Snipes, daughter of the late Garner, the leading questions in the video called herself “Laura Lewis,” and, according to protesters who interacted with her, seemed weirdly overeager to prove her liberal bona fides. For instance, her Twitter account (quickly protected when a reporter contacted her), was “parody-like in its adulation of the left, along with its obvious Photoshops of her with Al Sharpton and Bill Clinton,” reports Animal (It’s a pretty bad photoshop, too).

To prove her commitment, “Lewis” said that she was a Garner supporter because of her black boyfriend in Florida, who was having trouble with police harassment. As attorney and activist Esther Baldwin told Animal:

Like her Twitter account, Lewis was a little over-the-top in her attempt to gain legitimacy. “When I got to Staten Island, almost immediately after greeting Erica, she pulls me aside to talk about the boyfriend again. I guess she didn’t think that I could believe that she had a black boyfriend (as if that is so far fetched), so she pulls up a picture of a black man on her phone to provide evidence of her relationship, which I thought was very odd. Then she begins to tell me that she’s so sick of the system and that Ramos and Liu got what they deserved. That’s when I ended the conversation and walked away from her.”

If this sounds absurd to you — especially in its “okay, you’re totally making stuff up, GTFO”-ness — keep in mind that O’Keefe first gained public notoriety when he tried to get an ACORN employee to help him smuggle prostitutes into America… by dressing up as a bad blaxploitation version of a pimp.

So basically, if a white person walks up to you and starts saying wildly distorted stuff about your cause in an attempt to befriend you, it’s probably someone from Project Veritas trying to make a damaging video about you? Just a warning.

Read more over at Animal NY.