Here’s the NFL Playoff Picture After Week 15: Who’s in, Who’s Out, and Who’s (Barely) Still Alive 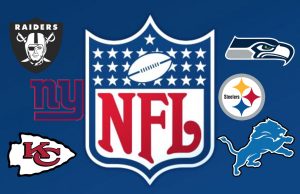 It is, in the opinions of many sports fans, the greatest time of the year: that sweet spot on the calendar when the NFL charges ahead into the postseason, the exciting if not dizzying array of college football Bowl games are set, and NCAA basketball is slowly heating up. Hell, even the NBA holiday games and the Winter Classic add to the fun.

After this past weekend of games on the NFL schedule, the playoff picture is coming more and more into focus, with the final two games increasingly crucial to the postseason race. And if you go back to the preseason rankings for the 2016 outing, the current docket of teams would have made many pundits and pros scratch their heads. By every measure, teams like the Miami Dolphins, the Baltimore Ravens, and the Atlanta Falcons have increasingly exceeded expectations with the possibility of playoffs berths looking more realistic by the day. Then you’ve got the year’s biggest disappointments: the Carolina Panthers. The Arizona Cardinals. The Cincinnati Bengals.

Let’s break down the likelihood of who’s in, who’s out, and who’s barely still alive after week 15 of the NFL season.

At the current pace, the Kansas City Chiefs (despite their loss this week to Tennessee) are in the driver’s seat for the Wild Card, while the Dolphins continue to make the case for a playoff berth as well despite a season-ending injury to quarterback Ryan Tannehill who is facing the possibility of ACL reconstructive surgery. They’ll finish off the season with two tough division rivalry games to further their cause: on the road at Buffalo in Week 16 and finishing at home to New England.

Hot on their heels however is the next grouping of teams who are still alive in the AFC:

The conference is anything but set and the final two weeks will prove pivotal for many franchises looking to get in. If the Bills put out an impressive showing this week against Miami — with a defense anchored by Lorenzo Alexander and Stephon Gilmore (whose 5 interceptions is tied for second in the league) — they’ll face the lowly 4-10 Jets in week 17. The “eliminations” pile in this Conference include Cincinnati, San Diego, the Jets, Cleveland, and Jacksonville. Can Tom Coughlin really return to JAX and bring his magic touch? That’s a column for another day…

The insanely competitive NFC East has only one team out of playoff contention, with the surprise Cowboys anchored behind the talents of rookie sensations Dak Prescott and Ezekial “Red Kettle Bell” Elliott. But despite their 2016 outing, their 12-2 record still isn’t enough to lock up the division; their only two losses came from the Giants, who would win a tie break if their records end the same. The Giants finish up with two division games of their own — at Philadelphia and at Washington — making for a final two weeks of must-watch pigskin.

But with all the attention on the East, don’t sleep on the South; mathematically, every team is still in contention for the postseason, as we see when we take a look at the teams still alive in the NFC:

Surely, the Panthers — who NFL.com ranked at #1 during the preseason — have fallen short of expectation; they’ll finish up their season with games at home against Atlanta and on the road against the Bucs. Must-win games? Must-win games for sure, with lots of help. But the Packers, currently “in” if the regular season ended today, are as hot as Aaron Rodgers‘ house in that State Farm ad: they’ve won their last four with Minnesota and Detroit left to go. They barely eked out a last-second win however against the sad Bears on a Rodgers-Nelson final drive connection, and the Vikes will be a tough showdown.

And in the elimination pile in the NFC, we’ve got Arizona, Philly, Los Angeles, Chicago, and of course the 1-13 49ers, who certainly stirred up off-the-field headlines this year that did not unfortunately translate to much success where it matters most.

If the postseason started today, the games would be:
AFC WILDCARD
Miami at Pittsburgh
Kansas City at Houston

New England and Oakland with the first round bye.

Dallas and Seattle with the first round bye.

But with two key weeks left in the season, this projected schedule above is almost certain to change. Any given Sunday (or Saturday or Thursday or Monday night), and that’s why they play the game…
—
J.D. Durkin (@jivedurkey) is an editorial producer and columnist at Mediaite.