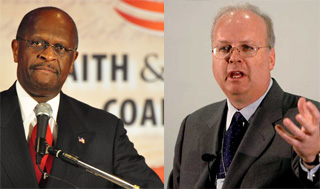 This morning, Karl Rove went on Fox News and listed Herman Cain’s past mistakes on a white board, claiming the candidate had “peaked” in the polls. At the time, we suggested that this might just be another case of a GOP establishment type knocking a Tea Party favorite. Unsurprisingly, there was at least one person who was quick to jump on that theory. That person? Herman Cain.

Cain spoke to the Washington Examiner‘s Byron York today and hit back at Rove’s comments.

“‘It’s a good thing the voters are not looking at Karl Rove’s little whiteboard,’ Cain said in a phone conversation from a stop in Chicago Monday afternoon. ‘I believe it is a deliberate attempt to damage me because I am not, quote unquote, the establishment choice. But why not go with the choice that the people seem to like?’

Cain accused Rove of bias in favor of candidates with big organizations, lots of money, and prior experience in political office — all things Cain doesn’t have. ‘What has Karl Rove done?’ Cain continued. ‘If I become the nominee, he has given Democrats talking points for a commercial to attack me. It makes no sense unless it’s a deliberate attempt on his part to try to push me down so that the candidate he wants rises to the top.'”

York asked Rove for a response and the GOP strategist countered, “Herman Cain is the one giving the Democrats material for attack ads.”

Check out the rest of both conversation here.