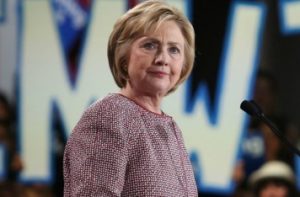 Hillary Clinton took to social media Friday to honor those who were impacted by the Haiti earthquake on the eighth anniversary, and also to condemn Thursday’s remarks from Donald Trump.

Trump’s widely reported comment came Thursday during a bipartisan meeting with lawmakers on immigration in which he used the term “shithole” to describe Haiti and African countries and expressed an interest in accepting immigrants from countries like Norway, whose prime minister he had spoken with the day before.

In her tweet, Clinton said that Trump’s statements were “racist” and “ignorant:”

The anniversary of the devastating earthquake 8 years ago is a day to remember the tragedy, honor the resilient people of Haiti, & affirm America’s commitment to helping our neighbors. Instead, we‘re subjected to Trump’s ignorant, racist views of anyone who doesn’t look like him.

It’s worth knowing that Trump has since *sort of* denied making the controversial comments. Democratic Senator from Illinois Dick Durbin said on Friday that the president did indeed use the term “shithole” during the course of the meeting on immigration reform — which Durbin attended. The senator described Mr. Trump as saying “things which were hate-filled, vile and racist.”

UPDATE: Bill Clinton has since joined in on the conversation with his latest tweet:

I’ve traveled and worked in Haiti, and across Africa and Central America. The countries the president described with his epithet do not exist. Some thoughts as we remember those lost in Haiti eight years ago today: https://t.co/iXJwEAo2f6