Hillary Clinton Should Tell Mark Cuban Right Where to Go 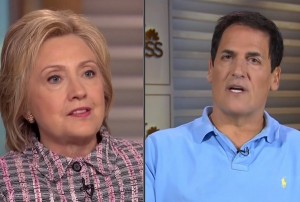 It’s enough to turn anyone into a Berner. For some reason, Chuck Todd and the rest of the mainstream media are humoring the idea that billionaire idiot Mark Cuban could be Hillary Clinton‘s running mate, or even president himself, because one billionaire idiot in the race isn’t quite enough. To add insult to injury, Chuck Todd shopped the idea to likely Democratic presidential nominee Hillary Clinton on Sunday’s Meet the Press, and Hillary somehow didn’t respond with an ostentatious two-minute spit-take in which she repeatedly went back for more water to spit all over Chuck, followed by convulsive laughter and a hearty “Hey-ha-hey-ha-HEYLL  NO!”

Instead, she said this:

CHUCK TODD: I did a interview with him earlier. He expressed serious interest. If you called him up and said, “I want to vet you to be my running mate,” he’d listen. What do you say to that?

SEC. HILLARY CLINTON: I think we should look widely and broadly. It’s not just people in elective office. It is successful businesspeople. I am very interested in that. And I appreciate his openness to it.

It’s nice that she turned it into a slam on Trump, but when you’re trying to close out Bernie Sanders, it’s the wrong time to send up a Bat-signal that you’re still “pro-business,” whether you mean to or not.

More narrowly, though, has Hillary Clinton ever listened to Mark Cuban? He’s not just an idiot, he’s a particular kind of idiot that the mainstream media loves. Here’s what he told Chuck Todd about being tapped as Hillary’s running mate (emphasis mine):

CHUCK TODD: All right, let me go back to Clinton versus Trump here. You joke that you would love to be Clinton’s running mate, as long as you were allowed to throw bombs at Trump. If she really did come to you, would you listen?

MARK CUBAN: Absolutely. But the key would be that she’d have to go more to center. I like the fact that Senator Clinton has thought out proposals. That’s a good thing because at least we get to see exactly where she stands. But I think Senator Sanders has dragged her a little bit too far to the left. Things like college tuition and, you know, other business elements that really I think could hurt the economy. If she’s willing to listen, if she’s willing to, you know, hear other sides of things, then I’m wide open to discussing it.

CHUCK TODD: What about Donald Trump?

MARK CUBAN: Same. You know, I’m an independent. And I’m fiercely independent and think for myself.

Let’s just start with his policy advice for Hillary, because we all remember how college students took down the economy in 2008, don’t we? But leaving aside the particulars of Cuban’s finickiness with Hillary’s policy positions, does anyone remember what he said about Donald Trump mere weeks after he gave his Mexican Rapists Speech? “I don’t care what his actual positions are. I don’t care if he says the wrong thing. He says what’s on his mind,” Cuban said. “He gives honest answers rather than prepared answers. This is more important than anything any candidate has done in years.”

What’s so galling about this is that Mark Cuban is the poster-child for the type of voter that the mainstream media never gets tired of venerating, but if you can’t decide between a centrist liberal like Hillary Clinton and the full-on racist appeal of Donald Trump, then you’re not a “fiercely independent” free thinker, you’re a moron. I’m not even saying you have to like Hillary. I understand the appeal of Donald Trump; President Obama deeply understands the appeal of Donald Trump. But this isn’t a choice between Coke and Pepsi, it’s the choice between Satan and Yahweh, and cast those roles however you see fit.

Years ago, when Republicans still tried to dress themselves in moderate drag, you could make an argument for such a creature, but our elections are now decided by the ten percent of people in the middle who are too stupid to make up their minds, yet still manage to figure out how to get a photo ID and work a voting machine. And the media loves it.