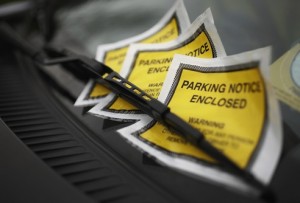 No one is above the law. Or at least, that’s what one British traffic warden thought when he attempted to place a ticket on a car belonging to Hillary Clinton during her visit to England, after initially being confronted by a five-man team of angry security agents. But in spite of being intimidated, this Westminster City Council warden still placed the ticket on the car and went on his merry way.

According to what one photographer told The Daily Mail, Clinton’s car was parked without paying for the space first, and so the warden thought he could just do his job, but not if Clinton’s security team had anything to say about it.

The photographer claimed he saw one of the agents angrily waving his arms and flashing his badge to the warden, who remained unflustered and continued to issue the ticket to Mrs Clinton’s vehicle.

Cllr Daniel Astaire, Westminster City Council cabinet member for business, told MailOnline: ‘Despite our traffic marshal being questioned by the secret service for just doing his job, he was in the right.

‘The former US Secretary of State was parked for nearly 45 minutes without paying. I’m sure she will understand that we have to be fair to everyone, regardless of their status on the world stage.’

Clinton is being fined 80 pounds (or 40, if it’s paid within 14 days). Meanwhile, foreign diplomats not paying their parking tickets has cost New York City a TON of money over the past few years.