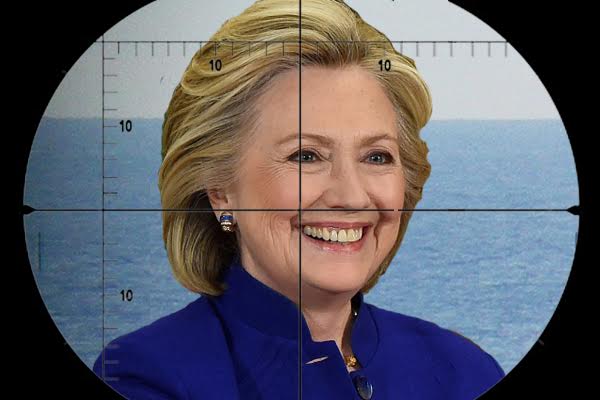 In a normal world, things would be looking up for former Secretary of State and Democratic frontrunner Hillary Clinton. After six months or so of wall-to-wall coverage of the Clinton emailgate “scandal,” things started to take a good turn for her this month. First, she reset the narrative by finally (if belatedly) acquiesced to media demands that she phrase her apology for the ill-advised personal email decision using the approved nomenclature.

Then came the twin revelations that the Department of Justice ruled that Hillary was well within her authority to decide and delete personal emails, and that the mysterious server in question was apparently not “wiped,” contrary to claims made by Rep. Trey Gowdy (R-SC) and repeated ad nauseam by the media. There doesn’t seem to be much left to talk about at this point, since she’s apologized, and since the recent news quiets what little wind remains in the sails of the story (until Hillary testifies before Congress in October, at least).

But to hear the media tell it, things are not looking up for Hillary, because there is not a journalist alive today, right, left, or center, who stands to gain anything from good news about Hillary Clinton. The recent revelations that cut in her favor have been reported in a relative whisper, while the bulk of the Hillary Clinton coverage has shifted over to the backup narrative, the threat to her candidacy posed by Sen. Bernie Sanders (I-VT), buoyed by the trust issue they created by pimping a now-debunked poll.

Hillary’s problem is that she has become the common enemy of every corner of the media. Fox News and Joe Scarborough flog the email story because they’re Fox News and Joe Scarborough, while “objective” media like CNN, the New York Times, and the likes of Andrea Mitchell hype it because if it’s not a story, then they don’t have a story. But even the liberal hosts at MSNBC, and perhaps especially them, have been chipping away at Clinton for months, for their own reasons.

Their coverage of the email story has essentially consisted of weak debunking efforts, combined with concern-trolling about the “perception” that these stories “feed into.” When the New York Times falsely reported that Hillary’s email use was the subject of a criminal probe, for example, the response was not to demand the reporter’s firing, but to praise him as “excellent” and to call Hillary supporters “paranoid.”

But the MSNBC-left’s main stock-in-trade has long been to hype challengers to Hillary’s seeming lock on the Democratic nomination, first in the form of Sen. Elizabeth Warren‘s (D-MA) phantom candidacy (now a rumored co-ticket with Vice President Joe Biden), and then with Warren’s liberal heir-apparent in Sanders. Long before Sanders began to make inroads in eggshell-white early state polling, MSNBC hosts hyped Sanders’ crowds and displayed a clear rooting interest in his candidacy.

There’s nothing necessarily wrong with promoting more left-leaning candidates, if Sanders and Warren are more to their tastes, but what is wrong is failing to adequately come to a strong and truthful defense of Hillary Clinton, and the result has been that, in the past several months, the best defense I’ve seen of Hillary Clinton, anywhere on cable news, has been from Fox & Friends co-host Brian Kilmeade. I watch a lot of MSNBC, but during the only ten minutes I’ve watched Fox News in months, Kilmeade made better points on the Hillary Clinton story than I’ve seen anywhere else:

“In a situation and an era where every day we wake up and find out something else that we had was hacked by another government looking to do us harm, whether it’s that or a major movie company, we find out our secretary of state was willy-nilly emailing back and forth with the most important people in our country.”

“And she’s also saying to the President, and saying to David Muir to the President, ‘I used email back and forth to everybody, and if they had a problem with it, why didn’t they tell me now?’ And how interesting was it yesterday that David Axelrod comes out and mocked the fact that she came out with this story in the New York Times saying how she’s going to redo her image and show more of a human side, and really he’s already come down on her for the fact that he (sic) used private email, yet she is subtly going back at him and others saying ‘I was emailing with you, you never said a word about it. If you had a problem with it, you could’ve stopped it in its tracks.'”

The first point Kilmeade makes, albeit probably unintentionally, is that while government servers like the one everyone thinks Hillary should have used have been hacked repeatedly, there has been absolutely no evidence produced that Hillary Clinton’s email server was ever breached. Sounds like Hillary’s “mistake” was more of a happy accident.

But he also intentionally pointed out that this email story is something of a sandbagging effort, in that everyone Hillary ever emailed while at State had to, by definition, have known she wasn’t using a dot gov email.

The point is that no one in the media is going to save Hillary Clinton. The left is too invested in Bernie Sanders, and everyone else is too invested in a close Democratic primary. What Hillary Clinton needs to turn this narrative around is the same thing that President Obama used to flip the lame-duck narrative that dogged him after Democrats fled from him during the midterms: a string of big victories.

Having more than 6 debates would be a good start, but what Hillary really ought to do is start Apollo Creeding Donald Trump. She’s already said she can’t wait to debate him in the general election, but I’d be willing to bet that if Hillary Clinton challenged that chump to throw down on, say, State of the Union with Jake Tapper, he’d be hard-pressed to resist. Tapper is a sharp, honest reporter who also happens to enjoy wide respect on the right, so Trump could hardly object, and the DNC would be equally hard-pressed to disqualify Hillary fro their own debates.

If Trump did duck the challenge, Hillary would benefit immensely, and it would strengthen her case for being able to take on the eventual Republican nominee. If Trump accepted, it would just be a simple matter of mopping the floor with him. No matter how Trump performed, he’d get a bump from Republicans just from stepping into the ring with her, but for Hillary, it would be a game-changing way to siphon off some of the energy that’s currently being devoted to her chief rivals in both parties.